Note: This is the page for Bill Robinson the 20th Century outfielder. For others with the same name, click here. 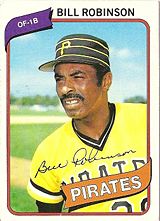 Bill Robinson was once predicted to be the New York Yankees' "next Mickey Mantle". He did not exactly fill those shoes, but had some great years. He had a three-home run game on June 5, 1976 for the Pittsburgh Pirates against the San Diego Padres. In 1977, he batted .304, hit 26 home runs and had 104 RBI. His main teammates were Dave Parker, John Candelaria, Willie Stargell, Kent Tekulve, Phil Garner, Richie Zisk, Al Oliver and Rennie Stennett.

In Game 7 of the 1979 World Series, the Pirates trailed the Baltimore Orioles 1-0 entering the top of the 6th inning. With one out, Robinson singled off Scott McGregor and Stargell followed with a two-run homer. The Pirates then tagged on two runs in the 9th, the second run coming when Robinson was hit by a Dennis Martinez pitch with the bases loaded. The Pirates won 4-1, to take the Series. During his time with the Pirates, Robinson was known as a "super sub", filling in at every outfield position and both corner infield slots and seeing regular action despite having no set position.

Robinson also played with the Atlanta Braves and Philadelphia Phillies. He had the somewhat odd distinction of being traded for two different players named "Wayne": Wayne Simpson of the Pirates in 1975 and Wayne Nordhagen of the Phillies in 1982.

After his playing career ended, Robinson was hitting coach of the New York Mets from 1984 to 1989, where he was affectionately referred to as "Uncle Bill" and was a frequent hotfoot target of Roger McDowell. In 1988, he managed the Leones del Caracas into the 1988 Caribbean Series. In 1990 and 1991, he was an analyst on ESPN's "Baseball Tonight". In 1992, he managed the Shreveport Captains, in the San Francisco Giants organization. From 1994-1998, he coached and managed in the Phillies minor league chain. Robinson was a coach for the Reading Phillies in 1994 and managed the club in 1996. He was a coach for the Scranton/Wilkes-Barre Red Barons in 1997-1998. Robinson was then a coach with the Columbus Clippers in 1999-2001. He later spent time as hitting coach with the Florida Marlins and was selected out of all the hitting coaches in MLB to coach the series with MLB all-stars against Japanese all-stars in Japan. From 2006, he was a hitting instructor in the Los Angeles Dodgers farm system. He died in a Las Vegas hotel room in 2007, while working in a series between the Las Vegas 51s (the Dodgers' AAA affiliate) and the Round Rock Express.

Bill's nickname from childhood was 'Blinky' due to his tendency to blink his eyes when he was nervous. His son, Bill Robinson III, played professional baseball from 1986 to 1988.