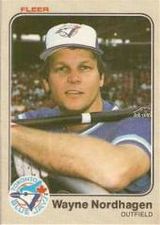 Outfielder Wayne Nordhagen had an eight-year career in the majors, mostly with the Chicago White Sox, hitting .282 lifetime. He retired with exactly 500 games and 1,500 plate appearances in the big leagues.

Selected by the New York Yankees in the seventh round of the 1968 amateur draft, Nordhagen began his pro career that summer with the Johnson City Yankees. Midway through the 1973 season, he one of four players traded to the Atlanta Braves for Pat Dobson. After about two years in the Atlanta organization, spent entirely with the Richmond Braves, he was dealt to the St. Louis Cardinals.

Nordhagen began 1976, his ninth pro season, in the Philadelphia Phillies organization, with the AAA Oklahoma City 89ers, having been purchased from St. Louis in early April. In July, he was sent to the Chicago White Sox for Rich Coggins, and he made his big league debut on July 16th, going 1-for-4 as the designated hitter against the Milwaukee Brewers. Overall, in 22 games for the Sox that year, he posted a .189 average. In six years with Chicago, he hit .300 three times, and he hit 15 home runs for the team in 1980. In addition to playing outfield, while with the Sox, he was used 25 times as a catcher. In 1979, he appeared twice as a pitcher; his ERA in 2 innings was 9.00.

Before the 1982 season, Nordhagen was dealt to the Toronto Blue Jays for Aurelio Rodriguez. He was then traded in midseason to the Pittsburgh Pirates and then back again after just one game, as the Pirates claimed Nordhagen had a pre-existent injury. Whether true or not, the Blue Jays took him back and he finished the year with them, playing a further 28 games. He was back in Chicago with the Chicago Cubs in 1983, but was released after hitting just .143 in 21 games.

In 1989, Wayne Nordhagen played for the Bradenton Explorers of the Senior Professional Baseball Association. He hit .310 with 8 homers and 42 RBI in 48 games for the club.

Nordhagen is the uncle of Kevin Millar. Through 2019, he is the only major leaguer to come from Thief River Falls, MN, in northern Minnesota near the border with Canada.