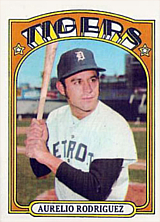 Aurelio Rodríguez was known as a defensive wizard at third base but never hit more than .254 in any of his 17 major league seasons. Clearly, his almost magical defensive skills were his main calling card. Though only a one-time Gold Glove winner who was constantly overshadowed by the great Brooks Robinson, his lightning-quick reflexes and sure hands resulted in great plays that most third-sackers could only dream of. His defensive skills single-handedly kept him in the majors, and far overshadowed his anemic career offensive numbers.

He began his professional baseball career at the age of 17, hitting .260 for the Jalisco Charros in 1965. He also hit .293 with 25 homers and 104 RBI for the Fresnillo Mineros in the Mexican Center League, tying for fourth in the league in homers. In 1966 Rodríguez hit .292/~.313/.413 for Jalisco and led the Mexican League with 16 triples. That earned him a deal with the California Angels - over the next four seasons he split time between the Angels and their top farm teams.

In 1970 Rodríguez was having his best year in the majors with the Washington Senators (a 102 OPS+, 19 homers, 33 doubles, 15 steals, 83 RBI and 70 runs - all career highs) at the age of 22 while playing for Ted Williams when he was shipped to the Detroit Tigers as part of a deal for Denny McLain. In 1976 he broke Brooks Robinson's run of 15 straight Gold Gloves at third base in the American League.

Rodríguez also was a long-time fixture in the Mexican Pacific League, winning MVP in 1983-1984 after hitting .317 for Los Mochis. After retiring, he moved into the front office and managed Monterrey to the Mexican League title in 1991. In 1995 he was voted into the Salon de la Fama. That same year, he was managing the Reynosa Broncos but was suspended for the season after hitting umpire Alejandro Villalpando in arguing over a call.

Ironically, in September 23, 2000, Rodriguez was visiting Detroit from his home in Mexico. While he was walking on Detroit's southwest side at 2:00 in the afternoon with an unidentified woman, a car swerved and jumped the sidewalk, running over Rodriguez before hitting a tree. The driver of the car had suffered a stroke. Rodriguez, who had to be pulled from under the car, was 52 at the time of his death. Rodriguez' funeral in Mexico was attended by thousands of people, including the president of the country. He was elected to the Latino Baseball Hall of Fame as part of its 2012 class.

He was the brother of Chico Rodríguez and the father of Aurelio Rodríguez Jr..

Rodriguez' 1969 baseball card depicts not Rodriguez, but an Angels batboy.