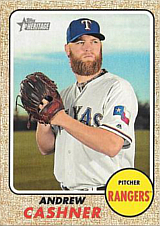 Cashner with the Padres in 2012

Pitcher Andrew Cashner was the first pick of the Chicago Cubs in the 2008 amateur draft, taken 19th overall. He was signed by scout Trey Forkerway and started slowly in his first year in the Cubs' organization, going 1-2, 5.85 in 8 games spread among three teams, the AZL Cubs, Boise Hawks and Daytona Cubs. He began 2009 with Daytona in the Florida State League. He was a starting pitcher, but was working with a strict pitch count that meant he was usually out of the game after 4 innings or fewer. In 12 starts, he had 12 no-decisions and pitched only 42 innings, but his 1.50 ERA was very good. At midseason, he was promoted to the AA Tennessee Smokies and allowed to pitch a little deeper into games. In 12 more starts, he pitched 58 1/3 innings, going 3-4, 3.39, capping a very encouraging first full season as a pro. In 2010, he made 6 starts at Tennessee, and then pitched 5 games in AAA with the Iowa Cubs before getting the call to the major leagues. He was 6-1, 2.05 at that point.

Cashner made his major league debut on May 31, 2010, pitching a scoreless third of an inning against the Pittsburgh Pirates, replacing John Grabow on the roster. He stayed in the Cubs' bullpen for the remainder of the season and pitched 53 games as a rookie, all in relief, going 2-6, 4.80 in 54 1/3 innings. Still working on his control, he struck out 50 batters and walked 30. He earned a spot in the Cubs' starting rotation at the beginning of the 2011 season. He pitched well in his first start on April 5th against the Arizona Diamondbacks, but had to leave in the 6th inning with tightness in his shoulder. The Cubs' bullpen then blew his 4-1 lead, but his teammates rallied for a 6-5 win, although he did not figure in the decision. Cashner was placed on the disabled list the next day, only pitching in 7 games for the Cubs as a result of the injury. In 10 2/3 innings, his ERA was an excellent 1.69 and he struck out 8 batters. He only made 5 appearances in the minor leagues, 3 starts for Tennessee and 2 relief appearances with Iowa, going 0-1, 3.86 overall.

On January 6, 2012, Andrew was traded to the San Diego Padres with minor league outfielder Kyung-Min Na for first baseman Anthony Rizzo and pitcher Zach Cates in a trade of top prospects. He was expected to compete for a job in the Padres' starting rotation following the departure of ace Mat Latos via an earlier trade. He pitched 33 times for the Padres that year, also making 6 starts in the minor leagues where he put up an excellent ERA of 2.31 during two rehabilitation stints. In the big leagues, he made 3 starts and put up an ERA of 4.27 in 46 1/3 innings, missing much of the second half with a back strain. He was expected to compete for a spot in the Padres' starting rotation in 2013 but was set back by an offseason injury. He cut a tendon in his pitching hand when a knife held by a friend slipped and cut him; the two were cleaning a carcass on a hunting trip. Cashner underwent surgery, but was ready for the start of the season. After making his first five appearances out of the bullpen, he moved to the starting rotation on April 20th and pitched quite well. On July 27th, he hit his first career home run in a 12-3 win over the Arizona Diamondbacks that pushed him to 7-5; of course, he was given the silent treatment by his teammates after his feat, a common prank played on players who hit highly unexpected dingers. While the homer was his first, he was batting .300 on the year (and .250 for his career), showing that he was far from helpless with a bat in his hands. On September 16th, he made an unsuccessful bid to become the first pitcher in the 45-year history of the Padres to throw a no-hitter. Facing a first-place Pittsburgh Pirates team, he retired the first 18 batters he faced before giving up a 7th-inning knock to Jose Tabata. Tabata was erased in a double play and Cashner was perfect the rest of the way, finishing a 2-0 one-hitter while facing the minimum 27 batters. He finished the season with a record of 10-9, but his peripheral statistics were much better: a 3.09 ERA (ERA+ of 111) in 175 innings, 151 hits allowed and 128 strikeouts.

Before the 2014 season, Cashner took the Padres to salary arbitration. He was the first player to win his case in two years, as all cases had been settled before a decision in 2013, and fellow pitcher Vinnie Pestano, whose case was also decided on February 9th, was a loser. Cashner received $2.4 million, while the Padres were offering $2.275 million - the smallest gap among players not to settle before a hearing that year. On April 24th, he made a brief appearance in left field in the 11th inning of a game against the Washington Nationals. Left fielder Seth Smith had to leave the game with a groin injury after batting in the top of the inning and manager Bud Black had already decided he was going to make a double switch after one batter in order to bring in lefty Alex Torres to face Adam LaRoche. He did not want to burn one of his bench players for one batter, so sent his ace pitcher to left field. As it turned out, Jayson Werth lined out to Tim Stauffer, and Black could then proceed with the planned change, putting Torres in the slot in the batting order temporarily occupied by Andrew, while Tommy Medica took over in left field in Stauffer's spot. The unusual strategy worked perfectly as Torres retired the next two batters, the Padres scored a run in the top of the 12th, and Huston Street retired the Nats in order to save the 4-3 win. That season, he went 5-7, 2.55 in 19 starts, two of which were complete game shutouts.

Cashner's first season with the O's was a rough one. With the team setting a new franchise record for losses in a season, he did his part by going 4-15, 5.29 in 28 starts. He logged 153 innings, second-most on the team after Dylan Bundy, but only struck out 99 against 65 walks. 2019 was a different story, as although the Orioles continued to struggle to put wins on the board, he was doing great personally, going 9-3, 3.83 in 17 starts. This turnaround caught the eyes of teams looking for a boost to their starting rotation, and on July 13th, the Boston Red Sox made the first trade before the trading deadline by acquiring him for two 17-year-old prospects, Noelberth Romero and Elio Prado, both of whom were playing in the Dominican Summer League. The Orioles agreed to cover more than half of Cashner's remaining salary to ensure that they would get potentially useful players in return. Cashner immediately faltered in his swanky new digs, eventually banished to the bullpen, by finishing his season 2-5, 6.20 in 53 1/3 innings.