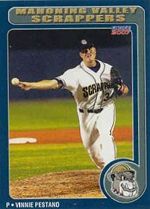 Pitcher Vinnie Pestano, who made his major league debut in 2010, is the son of William and Mary Anne Pestano. He has an older sister named Melissa.

In his early teens, Pestano was a bat boy for Cal State Fullerton. At 14, he pitched a no-hitter in a Pony League game.

Pestano was a four-year letterman at Canyon High School in Anaheim, California.

As a junior in 2002, Pestano was named to the second-team All-California Interscholastic Federation (CIF) squad and earned All-Century League honors.

In his senior year of 2003, Pestano went 10-3 with a 2.34 ERA and was picked as the team MVP. He was named to the All-CIF team, as well as the All-Century League squad, and the All-Orange County team.

During his college career, Pestano experimented with a side-arm delivery. After having some success with it, he started using it full time.

In 2004, Pestano pitched in relief for the Cal State Fullerton Titans. He made 30 appearances during the season, which led his team. He ended the season with a 3-3 record with 1 save and a 4.69 ERA.

In 2006, Pestano was named third-team preseason All-American by Louisville Slugger/Collegiate Baseball.Pestano was attempting to complete his 14th save of the season when he heard and felt a pop in his elbow. He had torn his ulnar collateral ligament and had to undergo Tommy John surgery to rectify it. The ligament was replaced with one from his left hamstring. For the year, Pestano had a 0.97 ERA in 29 games. Vinnie was named to the Roger Clemens Award Watch List, along with 40 other collegiate pitchers. He also was named a third-team ABCA/Rawlings NCAA Division I All-American.

Pestano was a criminal justice major.

In 2007, Pestano was able to start his professional career following months of rehab on his elbow. He saw action in 21 games for the Mahoning Valley Scrappers and picked up 6 saves and a 1-1 record with a 3.57 ERA. In June, Kelvin De La Cruz, Daniel Frega and Pestano threw a combined no-hitter for Mahoning Valley over the Vermont Lake Monsters in the second game of a doubleheader.

In 2008, Pestano began the season with the Lake County Captains and went 1-1 with 15 saves and a 1.55 ERA in 29 appearances. For his efforts, Vinnie was named to the South Atlantic League All-Star Team. In late June, he was called up to the Carolina League Kinston Indians.

On August 7, 2014, Pestano was traded to the Los Angeles Angels for minor leaguer Mike Clevinger.