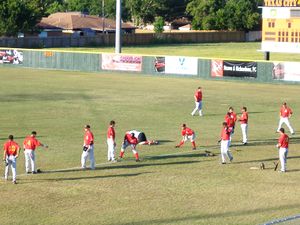 The Alexandria Aces were members of the Evangeline League throughout its 21-year history. In 1957 the team included Bob Riesener, who set a minor-league record by going 20-0.

The nickname was revived from 1972 to 1975 by the Alexandria entry in the Texas League.

After 18 years of being unused, the name came back again for the Alexandria entry in the independent Texas-Louisiana League in 1994. The Aces were the only team to win the Texas-Louisiana pennant more than once, taking it in 1997 and 1998. In 2002 the T-L was renamed the Central Baseball League; the Aces lasted just two years in the CBL before ending their run.

A fourth team called the Aces began play in the independent United League in 2006 and captured the circuit's inaugural championship.

All four Aces clubs have played their home games at Bringhurst Field.

Following the 2009 season, the Aces made the transition from a professional baseball team to a collegiate league squad in the Texas Collegiate League.

This page is in need of some additional content. Please help the Bullpen by expanding it, or learn how to contribute.
Retrieved from "https://www.baseball-reference.com/bpv/index.php?title=Alexandria_Aces&oldid=1241187"
Categories: