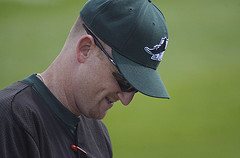 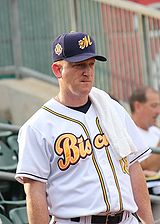 R.C. Lichtenstein has played, coached and managed in the minors.

Lichtenstein began his coaching career at the University of Illinois at Chicago where he studied and pitched as an undergraduate. He coached the Flames from 1991-1994, beginning as a volunteer assistant coach and eventually being named the pitching coach in 1994. The urge to pitch was still there, however, so he joined the 1995 Merrillville Muddogs, going 5-3 with a 3.35 ERA in 14 games. After the release of pitching coach Steve Trout on July 21st, Lichtenstein took on the additional role of pitching coach. The Mid-America League folded after one season and Lichtenstein moved on the manage the Dubois County Dragons of the Heartland League in 1996 and 1997.

The Milwaukee Brewers hired Lichtenstein in 1998 as the pitching coach for the Helena Brewers and he worked there for two seasons. The Brewers next promoted him to the Beloit Snappers where he spent the 2000 through 2002 seasons. He left the Brewers after five years and returned to the independent leagues in 2003, first as skipper of the Alexandria Aces of the Central Baseball League and then as pitching coach of the Edinburg Roadrunners the following year.

Lichtenstein joined the Tampa Bay Devil Rays organization as a member of the Southwest Michigan Devil Rays coaching staff in 2005-2006. He was pitching coach of the Vero Beach Devil Rays in 2007-2008, Bowling Green Hot Rods in 2009-2011, Montgomery Biscuits in 2012-2019, and Charleston RiverDogs in 2021-2022. Lichtenstein was scheduled to coach the Hudson Valley Renegades in 2000 before COVID-19 forced the cancellation of the minor league season.

Lichtenstein appeared in the 1992 movie The Babe starring John Goodman and Kelly McGillis. He played the role of Chicago Cubs pitcher Charlie Root who gave up the "called shot" during the 1932 World Series.