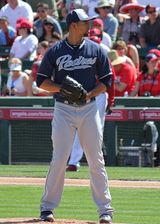 Tyson Ross made his pro debut in 2008 and reached the major leagues with the Oakland Athletics at the start of the 2010 season. His brother Joe Ross followed him to the majors five years later.

Ross went 6-4 with a 3.19 ERA as a freshman at the University of California and struck out 85 in 84 2/3 innings. He was named the school's freshman of the year. He was 6th in the Pacific-10 Conference in ERA.

Ross spent the summer of 2007 with Team USA, going 4-1 with a 0.82 ERA, 39 K and 7 walks in 43 2/3 innings. He led the team in strikeouts and innings, was second to Mike Minor in wins and second to Brett Hunter in ERA. Ross allowed one run and fanned 10 in 8 2/3 innings in the 2007 Pan American Games; he finished second to Adiel Palma in Ks. Facing a Dominican national team with six former major leaguers, he struck out 7 and allowed one run in 6 2/3 innings for the win. He tossed two scoreless relief innings and fanned 3 in the Gold Medal game in a loss to the Cuban national team. He went 1-1 with a 0.64 ERA in the 2007 World Port Tournament.

Ross slumped to 7-4, 4.25 as a junior. Ross was picked 58th overall in the 2008 amateur draft, going to the Oakland A's. He was signed by scout Jermaine Clark and began his pro career that summer.

Ross made his pro debut with the Kane County Cougars. On June 24, he faced the Quad Cities River Bandits and allowed no hits, walks or runs in two innings, striking out two. He had a 0-1, 4.66 record for the year with Kane County.

Despite a 10-11, 4.16 record in two minor league seasons and no AAA experience, Ross made the Athletics' roster out of spring training in 2010. He made his major league debut relieving Justin Duchscherer with a 5-4 deficit in the 6th inning against the Seattle Mariners. He began by whiffing Rob Johnson to end that frame. He tossed shutout ball in the 7th and 8th as the A's tied the game at 5. Brad Ziegler relieved Ross and Oakland would go on to win, 6-5. His first major league win was an eventful one. He came on in the 11th inning as the 7th A's pitcher of the night on May 11th against the Texas Rangers; staked with a 6-5 lead on a home run by Daric Barton, he blew the save opportunity, becoming the third A's reliever of the evening to record a blown save. Manager Bob Geren had earlier moved designated hitter Gabe Gross to the field, meaning Ross had to come to bat in the 12th, when he promptly struck out; he was the first A's pitcher to bat in a non-interleague game since 1995. The A's took a 7-6 lead in the 13th, and this time he held the Rangers scoreless in the bottom of the frame to get the credit for the win.

On November 16, 2012, he was traded to the San Diego Padres along with minor leaguer A.J. Kirby-Jones in return for Andy Parrino and Andrew Werner.

Tyson had a break-out season in 2014 when he emerged as the Padres' most reliable starter. He was named to the 2014 All-Star Game, although he was replaced under the Sunday Starter rule. He was then at the beginning of what eventually became a streak of 14 straight quality starts; he came within one out of making it 15 straight on September 7th, but left a game against the Colorado Rockies after 5 2/3 innings, having allowed only 3 runs, then was charged with his team's 6-0 loss. However, he had gone only 7-6 during the streak, in spite of putting up a 1.93 ERA, a victim of his teammates' struggles at the plate. He ended the season with a record of 13-14, 2.81 in 31 starts, recording 195 strikeouts in 195 2/3 innings.

From April 28 to July 29, 2015, Tyson made 16 consecutive starts without allowing a home run, a new team record. The streak lasted for 100 innings before Lucas Duda of the New York Mets went deep off him. He made 33 starts for the Padres that season, tied for the National League lead and ended up at 10-12, 3.26. While he allowed only 9 home runs - helped in part by pitching his home games at spacious Petco Park, he led the NL with 84 walks and 14 wild pitches. He also struck out 212 in 196 innings. He was given the honor of being the Padres' opening day starter in 2016, but he gave up 8 runs on 9 hits in 5 1/3 innings in a 15-0 beating at the hands of the Los Angeles Dodgers on April 4th. He was clearly not himself and immediately was placed on the disabled list with pain in his shoulder. Initial fears were that he would need to undergo season-ending surgery, but further tests gave the team some hope, as they showed all he needed was some rest although there was no timetable set for his return. It was in fact a season-ending injury and he did not pitch again that season.

Ross signed with the Texas Rangers as a free agent before the 2017 season but it was another disappointing year, as he made just 12 appearances - 10 starts - pitching just 49 innings and ending up at 3-3, 7.71. A free agent again after the season, he chose to return to San Diego and started the 2018 season with the team. In his third start on April 13th, he defeated the San Francisco Giants, 5-1, giving up just one unearned run in 6 innings and also contributing an RBI single in the 5th to open the scoring. He had been a pretty decent hitter all of his career, maintaining a batting average above .200 up to that point, a rare feat for a pitcher with more than a handful of at-bats. On April 20th, he made a bid to become the first Padres pitcher ever to throw a no-hitter, but he fell short, allowing his first hit with two outs in the 8th. The Arizona Diamondbacks' Christian Walker hit a ball to center field which Franchy Cordero appeared to mis-judge and which flew past his outstretched glove for a run-scoring double that tied the game at 1-1. It was the only hit of the game for Arizona. Brad Hand recorded the last four outs and received credit for the 4-1 win as San Diego scored three runs in the top of the 9th. His record was 6-9, 4.45 after 22 starts on August 5th when he was claimed off waivers by the St. Louis Cardinals. The Padres simply let him go, not attempting to work out any sort of trade and simply letting the Cards pick up responsibility for the remainder of his salary for the year.