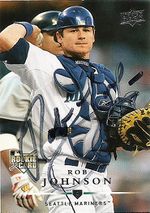 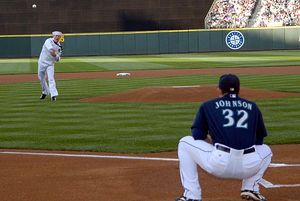 Johnson catching a pitch from a Navy sailor in 2009.

Rob Johnson was drafted by the Seattle Mariners in the 4th round of the 2004 amateur draft. He was signed by scout Kyle Van Hook and made his pro debut that summer.

Johnson caught for Team USA in the 2005 Baseball World Cup, splitting duties with Brian Peterson. He hit .273/.333/.545. The IBAF oddly listed his birthdate as June 12, 1982. At the time, his birthday was listed in other records as July 22, 1983. When his birth date was officially corrected in 2012, it turned out the IBAF had the correct year, and mlb had the correct day.

Johnson spent most of 2012 and 2013 in the minor leagues, in the New York Mets and St. Louis Cardinals' organizations respectively, although he had a chance to also spent time in the big leagues both seasons. He caught his break in 2013 when Cards starter Yadier Molina went on the disabled list in July, opening a spot to back-up Tony Cruz in the star's absence. Ironically, he made a mound appearance both of those seasons, pitching a scoreless inning for the Mets in a blow-out loss in 2012, and a third of an inning to complete a 13-4 loss to the Los Angeles Dodgers for the Cards on August 7th. In those two pitching appearances, he retired all four batters he faced, including a pair of strikeouts. While his last pitching appearance before that had been back in junior college, it was clear he could have found success in that role had he so chosen, given his fastball was timed at 92 mph in spite of his lack of pitching experience.