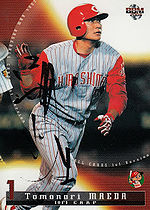 Tomonori Maeda has often been called the Japanese Eric Davis - a very athletic, frequently injured outfielder who plays for Japan's equivalent of the Cincinnati Reds, the Hiroshima Carp.

On September 1, 2007, Maeda connected for his 2,000th hit to join the meikyukai. His 2,000th was a single against Shinya Okamoto. He was the 36th player in Japanese history to reach that level. He was the third new member of the meikyukai in 2007, following Yukio Tanaka and Hideki Matsui. He was the 4th Carp player to get 2,000 hits with the team - two of the others were in the Japanese Baseball Hall of Fame.

This page is in need of some additional content. Please help the Bullpen by expanding it, or learn how to contribute.
Retrieved from "https://www.baseball-reference.com/bpv/index.php?title=Tomonori_Maeda&oldid=797004"
Categories: