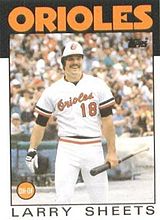 In the minors Larry Sheets was a mystery - an outstanding lefthanded slugging prospect who apparently had no great desire to play baseball professionally. He was signed as a 2nd round pick of the 1978 amateur draft by the Baltimore Orioles and scout Dick Bowie and finished out the season with the Bluefield Orioles appearing in 67 games, with 11 home runs for a .267 BA.

He chose not to play organized ball at all in 1981 due to college commitments and his personal indecision about his future. He returned midway through the 1982 season, and in 1983 he tied Glenn Davis for the Southern League home run title with 25 for the Charlotte O's.

By 1985 the enigmatic Sheets had reached the major leagues, where he made the Topps and Baseball Digest All-Rookie teams with a .262 average and 17 home runs as Baltimore's designated hitter.

The Orioles decided to trade Sheets to the Detroit Tigers for Mike Brumley on January 10, 1990. Sheets appeared in 131 games for Detroit but managed to hit only 10 home runs and average .261. On November 5th of that year, he was granted free agency.

Sheets reappeared in 1993 and played 127 games for the New Orleans Zephyrs getting 457 plate appearences with 128 base hits, including 18 home runs, and a batting average of .280. He also showed up late in the season in 11 games for the Mariners, getting 2 hits in 17 at bats, and was given his unconditional release.

His son Gavin Sheets reached the major leagues in 2021.