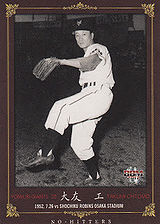 Takumi Otomo was a top pitcher in Nippon Pro Baseball in the 1950s, winning both the Sawamura Award and Central League MVP in 1953.

Otomo's college didn't have a baseball team, so he played in the industrial leagues after high school. He signed with the Yomiuri Giants in 1949. He went 4-4 with a 3.71 ERA as a rookie in 1950 then improved to 11-4, 2.42 in 1951. He was third in the Central League in ERA that year, behind Kiyoshi Matsuda and Shigeru Sugishita. He pitched six shutout innings (3 H) in the 1951 Japan Series, which Yomiuri won, but the team relied primarily on Hideo Fujimoto and Takehiko Bessho that postseason.

1952 marked continued success for the sidearmer. He had a 17-8, 2.26 record and .207 opponent average, made the CL All-Star team and began a streak of 18 consecutive wins over the Hiroshima Carp (a CL record for winning streak by a pitcher against a team). He also tossed a 13-strikeout, one-walk no-hitter against the Shochiku Robins on July 26. For the year, he was 4th in the league in ERA, after Tadayoshi Kajioka, Bessho and Juzo Sanada. He was 0-1 with a 1.93 ERA In the 1952 Japan Series, in which Yomiuri only used three hurlers (Fujimoto and Bessho were the other two). He lost game 3 to the Nankai Hawks' Susumi Yuki but Fujimoto was 3-0 on the Series to help Yomiuri to the title.

Otomo's biggest year was 1953. He was 27-6 with a 1.86 ERA, .200 opponent average and .93 WHIP. He also hit .255/.262/.314. He led the CL in ERA (.23 ahead of Fujimoto) and wins (four ahead of Sugishita and Masaichi Kaneda). He was somewhat close to a pitching Triple Crown as he was second in strikeouts (173, a distant 56 behind Kaneda). He made the All-Star team and the CL Best Nine, was named the league MVP and won the Sawamura Award as the top pitcher in NPB. In the 1953 Japan Series, he started game one against Nankai and got a no-decision then tossed a game 4 shutout and won game 7 in relief of Bessho to give Yomiuri a third Series in a row. The submarine hurler was arguably the top Giants hurler in that Series, but lost the Series MVP to 1B Tetsuharu Kawakami. In October, he beat Hoyt Wilhelm and the New York Giants, 2-1 (the New York Giants were missing Willie Mays, who was doing military service, but had the rest of their team). Overall, he had a 2.88 ERA and 15 K in 25 IP against the visiting Giants, nearly 3.5 runs better than the Japanese pitchers as a group. New York expressed interest in acquiring him, which would have made him the first Japanese player in Organized Baseball, but Yomiuri asked for $10,000 plus a couple players in return, and Horace Stoneham turned it down as too expensive.

The right-hander was 21-15 with a 1.68 ERA, .205 opponent average and .95 WHIP in 1954, making another All-Star team. He was second in the league in ERA (.29 behind Sugishita), fourth in wins (trailing Sugishita, Bessho and Kaneda) and fourth in strikeouts (199, behind Sugishita, Kaneda and Masatoshi Gondo). In an early 1955 tour of the Americans, he helped beat a Panamanian team including Hector Lopez, the Havana Sugar Kings (with a 3-hit shutout) and a Colombian squad. In the 1955 NPB season, he made his final All-Star team and finished the year 30-6 with a 1.75 ERA, .196 opponent average, .88 WHIP and 206 strikeouts. He tied Ryohei Hasegawa for the CL lead in victories, was 6th in ERA (between Tatsuyoshi Yasuhara and Kaneda) and was 5th in strikeouts (after Kaneda, Kazunori Nishimura, Sugishita and Hasegawaa). Yomiuri won the 1955 Japan Series but Otomo lost game 2 to Masaharu Obata and had a no-decision in game 5; he had a 3.86 ERA for the Series.

He was only 5-4 with a 3.89 ERA while battling arm trouble in 1957. In the 1957 Japan Series, he allowed one run in three innings of relief; he lost game one to Kazuhisa Inao and Nishitetsu. The next year, he was 2-1 with a 1.94 ERA in 10 games. He had nearly as many decisions in the 1958 Japan Series as in the regular season, at 1-1, 6.43. He beat Inao in game one after relieving Motoshi Fujita, started and had a no-decision in game 4 and dropped game 5 in relief on a homer by opposing hurler Inao. Yomiuri fell to the Lions, who got a record four wins in the Series from Inao. After not pitching in 1959, Otomo wound up his career with the 1960 Kintetsu Buffalo (1-2, 3.98).

After his playing career ended, Otomo coached for the Kintetsu Buffaloes and Chunichi Dragons and worked as a baseball commentator. He then worked in the electric industry and ran a souvenir goods store inside the Tokyo Dome. He died of leukemia at age 88.

He threw a fastball, slider and shuuto.