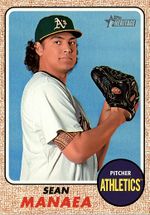 Pitcher Sean Manaea went undrafted out of high school and then attended Indiana State University. As a sophomore there, he went 5-3 with a 3.34 ERA and 115 strikeouts, and he followed that up with a 5-4 record, a 1.47 ERA, and 93 strikeouts in his junior year. He was then taken by the Kansas City Royals in the competitive balance round of the 2013 amateur draft, with the 34th overall pick, which made him the first-ever player selected in that round, which was being held for the first time that year. He did not pitch professionally that summer following hip surgery, but he posted a 7-8 record and 3.11 ERA in his pro debut with the Wilmington Blue Rocks in 2014. He pitched much better in the second half of the season after putting up a 4.44 ERA in the first half.

In 2015, he had health issues again, first a strained abdominal muscle and then a pulled groin that kept him from making his first appearance until the end of June. He made one rehabilitation start for the AZL Royals before returning to Wilmington. After four starts there, the Royals moved him up to the AA Northwest Arkansas Naturals in late July, but on July 28th, he was traded to the Oakland Athletics along with Aaron Brooks in return for utility player Ben Zobrist. He spent the remainder of the season with the Midland RockHounds, still in the Texas League, where he pitched lights out: he won 6 of 7 starts (the other was a no-decision) and his ERA was 1.90. On the year, he 7-1, 2.66 between the 4 stops, logging 74 1/3 innings in 14 starts.

He was assigned to the AAA Nashville Sounds to start the 2016 season, but after only 3 starts, he was called up to the Show. He had gone 2-0, 1.50 in the Pacific Coast League before getting a starting assignment against the Houston Astros on April 29th; he gave up 4 runs on 4 hits in 5 innings and was not involved in the decision. He earned his first big league win on May 16th, beating the Texas Rangers, 3-1. He made 25 starts that first season, going 7-9, 3.86 and pitching 144 2/3 innings, with a K/W ratio of 124/37. He followed that in 2017 with another solid team for a team that was never in contention, finishing at 12-10, 4.37 in 29 starts. He led the team in wins, pitching 158 2/3 innings. His walk rate went up slightly, but he was still controling the strike zone quite well as he struck out 140 batters while walking 55.

After not recording a complete game in spite of his good results in his first two season, Manaea put it all together on April 21, 2018. Facing the hottest team in baseball, the Boston Red Sox, who were 17-2 heading into the game, he pitched a no-hitter which was also the first complete game and shutout of his career, striking out 10 and walking 2. Oakland won the game, 3-0, and for the Red Sox, it was the first time they had been the victim of a no-hitter since Chris Bosio had pitched one against them in 1993. He followed that on April 27th with another excellent start against the Houston Astros; he did not allow his first hit until the 4th inning, and allowed just one unearned run in 7 innings in an 8-1 win. With that, he set a team record with 14 consecutive innings without allowing a hit, overtaking the previous record holder, Blue Moon Odom. Manaea had 4 wins and a 1.03 ERA in April and as a result was named the American League Pitcher of the Month. Unfortunately, he was unable to make it through a full season, as he was sidelined in September by a troubling shoulder that would require season-ending surgery. He was 12-9, 3.59 in 27 starts and was leading the team in both wins and innings pitched (160 2/3) by a significant margin, making his absence problematic with a postseason appearance looming for the A's.

He was expected to miss all of 2019 as well but came back much faster than was thought, as he made his first start of the year on September 1st. It seemed like he had not missed a beat, as in that game, he allowed just 1 hit and no runs in 5 innings against the New York Yankees. In his next outing, on September 8th, he picked up his first win, defeating the Detroit Tigers, 3-1, with 7 innings of two-hit ball. He allowed just 1 run, walked 2 and struck out 10 in pitching like a true ace. He went 4-0, 1.21 in his five starts and was selected to start the Wild Card Game against the Tampa Bay Rays on October 2nd. It was the first postseason appearance of his career, but one he would rather have forgotten as he gave up 4 runs in 2 innings, with three homers, and was charged with a 5-1 loss. In the pandemic-shortened 2020 season, he made 11 starts and finished at 4-3, 4.50. His most impressive statistic was a K/W ratio of 45/8. He made another postseason start, this one against the Houston Astros in Game 2 of the Division Series on October 6th. It went only slightly better than his start one year before, as he again gave up 4 runs, albeit in 4 1/3 innings this time and while giving up 2 long balls. The A's lost the game, 5-2, and he again was charged with the loss.

He started the 2021 season on the right foot, going 3-1, 2.83 in 5 April starts, but then saw his ERA rise to 4.78 as he was not able to record a win in 6 starts in May. He turned things around in June, with an ERA of 1.13 in 5 starts, and 34 strikeouts in 32 innings. He went 3-2 for the month and was named the American League Pitcher of the Month, his second time winning the honor. He had opened the month by pitching a 6-0 shutout over the Seattle Mariners on June 2nd, which was already his second of the season, although the first had been only a seven-inning affair. His only other nine-inning shutout had been his no-hitter in April 2018, the other time he had been named the league's Pitcher of the Month.