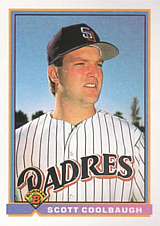 Brother of the late Mike Coolbaugh, Scott was named to the 1987 College World Series All-Tournament team and signed as the third round pick of Doug Gassaway, Sandy Johnson and the Texas Rangers in 1987. In 1987, he hit .275 with 21 doubles in 66 games, then .270 with 13 homers and 75 RBI while with the Tulsa Drillers in 1988. He was an American Association All-Star in 1989 when he hit .260 with 18 homers and 74 RBI. Scott came up for a looky loo that September, ultimately playing 167 games between 1989 and 1994 with a .215/.281/.310 line and 8 home runs. It has been noted Coolbaugh hit exactly two home runs in each of his four major league seasons, apparently a record for the most seasons to hit the same number of homers over a complete career (not counting players who had no home runs). His brother, Mike, hit two home runs in 2001.

In 1998, Coolbaugh hit .317/.395/.568 for the Hyundai Unicorns, finishing 4th in the KBO in batting average, the only foreign player in the top eight. His 97 RBI were five behind Seung-yeop Lee and six behind leader Tyrone Woods. Coolbaugh and Woods were clearly the top foreign players in the league's first year to allow non-Japanese foreign performers. Coolbaugh homered twice in the 1998 Korean Series to help Hyundai win the title; he was the first American to hit a home run in a Korean Series. Five years later, Coolbaugh's brother would play in Korea, making them the first brother duo to play in the majors and the KBO.