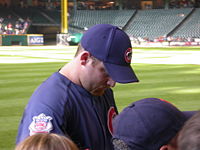 Dempster's best pitch is his change-up. He has a quirk in his motion which sees him jerk his glove slightly up and down while winding up. This makes it harder for batters to pick up the ball and to distinguish what pitch is coming.

Ryan's young daughter Riley is battling DiGeorge's syndrome (which makes her unable to swallow and digest food). His two-month old daughter (as of June 2009) was still in hospital, unable to leave due to her medical condition. Her prognosis remains "hopeful" and Ryan's four-year, $52-million contract would help provide the best possible medical care for his child.

When Dempster won his 107th major league game, on June 8, 2011, he passed Kirk McCaskill for second-most wins by a Canadian native. He was still 177 behind leader Fergie Jenkins. On July 14, 2012, he tied a Cubs franchise record held by Ken Holtzman since 1969 with 33 consecutive scoreless innings. With the Cubs well out of the running for the postseason, and Dempster leading the National League with a 2.11 ERA, his name began to surface in trade rumors before the trading deadline. On July 23rd, it was announced that he had been traded to the Atlanta Braves in a deal pending his approval, as a 10-5 player; that approval was not a foregone conclusion, given interest shown by other teams such as the Los Angeles Dodgers. Indeed, he made his next start for the Cubs against the Pittsburgh Pirates on July 25th, getting the 3-2 loss after allowing 3 runs on 5 hits in 6 innings to move his record to 5-5. Having officially vetoed the trade to Atlanta, he was sent to the Texas Rangers on July 31st, with the Cubs acquiring a couple of minor leaguers, Christian Villanueva and Kyle Hendricks in return. Taking over for Roy Oswalt, he had a rough first outing for Texas on August 2nd against the Los Angeles Angels of Anaheim, giving up 8 runs in 4 2/3 innings; his offense bailed him out, however, as the Ranger won, 15-9, the win going to Oswalt. He did much better in his next start, pitching shutout ball into the 7th inning against the Boston Red Sox on August 7th to earn his first American League win, 6-3. His next start was another shelling, however, as he gave up 8 runs for the second time in three starts in losing, 8-2, to the New York Yankees on August 13th. Then, on August 18th, he had to bow out of a scheduled start against the Toronto Blue Jays at the Rogers Centre because he had forgotten his passport and could not enter his native Canada. He made his next start on August 20th and had one of his best outings of the year, limiting the Baltimore Orioles to one run in 8 innings for a 5-1 victory. That seemed to get him back into a groove, as he went on to win his next four starts in succession, helping the Rangers to stay ahead of the surging Oakland A's in the AL West. He finished the year with a record of 7-3, 5.09 in 12 starts for Texas, for a combined total of 12-8, 3.38 in 28 games and 173 innings.

Dempster became a free agent after the 2012 season and on December 19th signed a two-year contract with the Boston Red Sox for $26.5 million. He immediately found a spot in the team's starting rotation in 2013, and while he did not rack up a lot of wins, he was a workhorse. He was involved in a controversy in an August 18th game against the New York Yankees, when he hit Alex Rodriguez with a pitch in the 2nd inning. Circumstances made it clear that he was deliberately throwing at A-Rod to make a statement against his use of PEDs, his lack of public remorse and his appeal of the 211-game suspension handed to him a couple of weeks earlier by Commissioner Bud Selig. He was handed a five-game suspension for his attempt at meting out personal justice. With a couple of off-days coming up, manager John Farrell decided to take advantage of the suspension to give him a longer rest in preparation for the September stretch run, sitting him down until the end of August. With the Red Sox clinching the division title on September 20th, Farrell announced that Dempster would henceforth pitch out of the bullpen: with five other starters available and pitching well, he would not have a chance to start in the postseason, and Farrell felt it was more profitable at that point to prepare him for working out of the bullpen in those crucial games. In the end, he was not needed in game-changing situations, but did pitch three inning in relief in the postseason, giving up only one run on a solo homer by Matt Holliday when he closed out the Sox's win Game 1 of the 2013 World Series when they had a large lead over the St. Louis Cardinals. He celebrated the Championship title on October 30th by staying on the field at Fenway Park until the small hours of the morning, pitching batting practice to friends and family, giddily celebrating the moment and unwilling to leave the premises even when asked by security guards.

Dempster announced his plans to sit out the 2014 season at the Red Sox spring training complex on February 16th, citing neck issues, and not being able to pitch as he would like. On December 5, 2014, he announced that his retirement was for good as he accepted a job with the Cubs organization as a special assistant to team President Theo Epstein. His tasks include being a spring training instructor and working with minor league players during the season, as well as doing some scouting work.

He came out of retirement to pitch for Canada in the 2017 World Baseball Classic, alongside former major league veteran Éric Gagné. As one of the team's few pitchers with big league experience, he was tasked to start two of Canada's three games, but was hit hard both times as he was obviously only a shadow of his former self. In 2019, he was elected to the Canadian Baseball Hall of Fame.