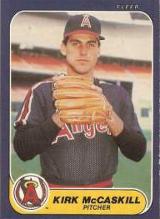 Kirk McCaskill was an all-American hockey player at the University of Vermont. He was drafted in the 4th round of the 1981 NHL entry draft (64th overall) by the Winnipeg Jets, and played the 1983-84 season for the Sherbrooke Jets of the AHL. His father, Ted McCaskill, played with the Minnesota North Stars of the NHL and the Los Angeles Sharks of the WHA in 1967-68, 1972-73, and 1973-74 and was also the Sharks' head coach that last season.

In baseball, McCaskill was signed as a 2nd round pick in the 1982 amateur draft by the California Angels and scout Joe Maddon. He reached the majors early in the 1985 season and became one of the team's top starters for the rest of the decade, twice winning 15 or more games and reaching over 200 innings pitched three times. In 1986, when the Angels won a division title, he went 17-10, 3.36 as the team's #2 starter behind Mike Witt. He made two starts against the Boston Red Sox in the ALCS, but lost both. After going 10-19 in 1991, he signed as a free agent with the Chicago White Sox and was 12-13 as a starter in 1992. He moved to the bullpen during the 1993 season, when the Sox won a division title and again pitched in the ALCS, this time against the Toronto Blue Jays. He did not gove up a run in 3 2/3 innings in three relief outings. He stayed with the White Sox as a relief pitcher until 1996, when he was released in mid-season after posting a 6.97 ERA.

He is the only pitcher ever to give up back-to-back home runs to a father and son; it happened on September 14, 1990 facing Ken Griffey and Ken Griffey, Jr. McCaskill's 106 wins were second by a Canadian major leaguer, following Ferguson Jenkins, until Ryan Dempster surpassed him in 2011.

He was inducted into the Vermont Sports Hall of Fame in 2015. He is also a member of the Canadian Baseball Hall of Fame, having been inducted in 2003. He has been the baseball coach at The Bishop's School in La Jolla, CA.