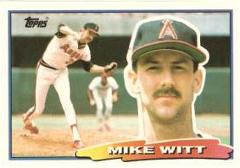 Mike Witt was signed as a 4th round pick in the 1978 amateur draft by the California Angels and scout Larry Himes.

Witt was the ace of the California Angels pitching staff from 1984 to 1988, before slipping noticeably to a 9-15, 4.59 record in 1989. Still, the New York Yankees acquired him early in the 1990 season in a trade for Dave Winfield, but Witt was done, winning only 8 more games between the trade and his last Major League appearance in 1993.

Witt threw a perfect game on the last day of the 1984 season, on September 30th against the Texas Rangers. He also pitched in a combined no-hitter six years later. On April 11, 1990, Mark Langston threw the first seven innings of the no-no against the Seattle Mariners, Witt throwing the last two innings to finish the perfecto.

Witt was the starting pitcher for the Angels in the famous Game 5 of the 1986 ALCS on October 12, 1986. Having won Game 1 handily, he was cruising along with a 5-2 lead coming into the 9th inning, with the Angels holding a 3 games to 1 advantage over the Boston Red Sox. He gave up a two-run home run to Don Baylor and was lifted from the game by manager Gene Mauch after he retired the next batter, Dwight Evans, on a pop-up for the second out. However, relievers Gary Lucas and Donnie Moore were unable to hold the lead - with Dave Henderson's two-strike, two-run home run off Moore being the key blow - and the Red Sox won the game in 11 innings and the next two as well to advance to the 1986 World Series.