Note: This page is for 1970s and 1980s pitcher Donnie Moore; for others with similar names click here. 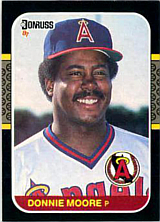 "I was throwing fastballs and Henderson was fouling them off, so I went with the split-finger, thought maybe I'd catch him off guard, but it was right in his swing." - Donnie Moore, after Game 5 of the 1986 ALCS

Pitcher Donnie Moore of the California Angels was one of the top relievers in baseball in 1985 and 1986, saving 52 games over those two seasons. However, in the 9th inning of Game 5 of the '86 ALCS, with his team on the verge of winning the series, Moore gave up a two-out home run to Dave Henderson of the Boston Red Sox, who went on to capture the series in seven games. Moore was not the same pitcher after that and played just two more seasons in the majors. After being cut by the Angels, he played for the Omaha Royals in in 1989 before being released in June. The next month, Moore committed suicide with a gun after shooting his estranged wife, who survived the shooting.

He was a cousin of Hubie Brooks.