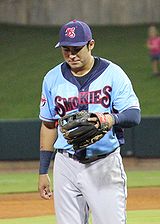 Christian Villanueva is an infielder who made his major league debut in 2017.

Signed as an amateur free agent by Texas Rangers scouts Bill McLaughlin and Mike Daly, he began his professional career with the DSL Rangers 2 of the Dominican Summer League in 2009, playing only 8 games (5 for 24, 2B, 6 BB). He moves to the AZL Rangers in 2010 and hit .314/.365/.431 with 14 doubles and 35 RBI in 51 games as a full-time third baseman. He tied for 6th in the Arizona League in doubles, tied for second in RBI (behind only Robert Maddox) and led the league's third basemen in fielding percentage (.917), putouts (31) and assists (91). He was named the league's All-Star at the hot corner. Baseball America listed him as the AZL's #14 prospect, between Chuckie Jones and Carlos Melo.

In 2011, he moved up to the Hickory Crawdads in the South Atlantic League, where he played 126 games, and hit .278/.338/.465 with good power, as he slugged 30 doubles and a team-high 17 homers. After stealing 7 bases his first two seasons, he went 32-for-38 in swipes. He also scored 78 runs and drove in 84. He fielded .942 at third. He was among the SAL leaders in several departments: fielding percentage at 3B (a league-best .942), double plays turned by a third baseman (37, 1st), runs (tied for 9th with Matt Lipka and Corey Dickerson), RBI (tied for 7th with Christian Vazquez), steals (tied for 6th with four others), total bases (10th at 217) and sacrifice flies (a league-best 13, 5 more than anyone else). Among Rangers farmhands, he was 4th in RBI and third in steals. In all of the affiliated minors, he tied Stephen Vogt and Matt Clark for second in sacrifice flies, one behind Nolan Arenado. He was named to the SAL All-Star team as a utility infielder (Adam Duvall got the nod at third). Baseball America named him the best defensive third baseman in the SAL and as the #8 Rangers prospect.

Villanueva seemed on the cusp of the majors at that point, but his stock fell badly when he hit just .211 in 64 games for the Iowa Cubs in his first taste of AAA in 2014. He ended the year back at Tennessee, where he hit .248, ending up a combined .230/.297/.379. He again split the season between the same two teams in 2015, although the bulk of it was at Iowa, where he played 123 games as opposed to 6 in Tennessee. His batting line recovered to some extent, to .257/.314/.438 with 23 doubles and 20 homers in 129 games, but he had become lost in the shuffle with the Cubs organization teeming with a slew of young prospects that would net them a World Championship the next year. To make things worst, he suffered a fractured fibula during spring training in 2016 and as a result missed the entire season. He then became a free agent and signed with the San Diego Padres.

Villanueva spent most of the 2017 season with the El Paso Chihuahuas in the Pacific Coast League, where he had an excellent year. In 109 games, his batting line was .296/.369/.528 with 28 doubles and 20 homers, in addition to 69 runs and 86 RBIs. That earned him a first major league call-up in mid-September and he made his debut on September 18th, starting at third base for the Padres against the Arizona Diamondbacks. He went 0 for 3 with a strikeout. He soon found his hitting stroke, however, as he homered in consecutive games on September 20th and 21st. As a result, for his cup of coffee, he hit .344 with 4 homers and 7 RBIs. On April 3, 2018, he was the hero of the Padres' first win of the season after four losses when he homered three times at Petco Park to lead the team to an 8-4 win over the Colorado Rockies. He was just the second rookie in team history with a three-homer game, following Hunter Renfroe who had done so the previous September. He continued to hit very well after that and finished April with a .692 slugging percentage, best in the National League, hitting a total of 8 homers. He was named the NL Rookie of the Month as a result. On May 4th, the Padres hosted the first game of a three-game series against the Los Angeles Dodgers at Estadio de béisbol Monterrey in Monterrey, Nuevo León in his native Mexico. He was thus designated to catch the ceremonial first pitch thrown by Mexican great Fernando Valenzuela. Things went downhill from there for the Padres, however, as they were the victims of a combined no-hitter by four Dodgers pitchers led by rookie Walker Buehler. Villanueva was going through an 0-for-37 stretch at that point, which was a team futility record, but he bounced back with 6 hits and 3 homers in a four-game stretch right after ending the slump. He went through another prolonged slump that lasted from May to July, but hit well in August, with a .356 average. After 110 games, he was hitting .236 with 20 homers and 46 RBIs when on August 21st, he broke a finger while attempting to field a ground ball off the bat of Ian Desmond of the Colorado Rockies. He stayed in the game but swelled overnight and x-rays revealed a fracture, putting him on the disabled list, likely for the remainder of the season.