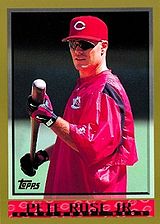 Pete Rose Jr. has had an extensive minor-league and independent league baseball career that lasted 21 years as a player, with several years more as a coach and manager. In 2007 he hit .342 for the Long Island Ducks of the Atlantic League and in 2008 he hit .289 for them. He played in the majors for one week in 1997.

Rose was born in Cincinnati, OH on November 16, 1969, shortly after his father Pete Rose had won the National League batting title that year. Attending Oak Hills High School in Cincinnati, he was drafted in 1988 in the 12th round by the Baltimore Orioles.

The Cincinnati Reds had him in 1997, and after he hit well in Double A ball, he was briefly moved up to Triple A and then to the majors. He appeared in 11 games in the majors, getting 2 hits in 14 at-bats. He also drew 2 walks but struck out 9 times. Pete was a starter in his first big league game, going 1-for-3, but never started again. Apparently manager Jack McKeon didn't think his fielding was solid enough. As for his hitting, it's been pointed out that Rose got only one start (he went 1-for-3 with a walk) but mostly had the disadvantage of batting as a pinch-hitter. [1]

He continued to play minor-league ball, either in Triple A, Double A, or in independent leagues. In those years, he played in the organizations of the Pittsburgh Pirates, Philadelphia Phillies, and (again) Cincinnati. The Joliet Jackhammers say he owns several defensive records while playing with them, and he was on the Northern League All-Star team while playing for them in 2003. He was named manager of the Florence Freedom, a Frontier League team playing in the greater Cincinnati area, on July 7, 2004, replacing Tom Browning. However, he quit after one game - a win -, preferring to return to play in the Northern League.

The son of Pete Rose Sr. and nephew of minor league pitcher David Rose, Pete Rose Jr. ended his major league career with 2 hits, 4254 shy of his father's total. Barry Larkin played with both Rose Sr. and Rose Jr. Like his father, Pete Jr. has a criminal record, pleading guilty to the distribution of a steroid alternative to his teammates on the Chattanooga Lookouts. He faced up to two years in prison for his crime, but instead served only a month in jail. He was released from jail on July 4, 2006.

He has also played in Mexico at least a couple of times.

After 21 years of playing, Rose turned to coaching in 2010 with the Florence Freedom. In December, 2010 he was named manager of the Bristol White Sox for 2011. He managed in the minors for several years and then became a manager in independent ball. He had his left knee replaced in 2012. [2]