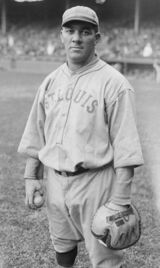 Pat Collins is most famous as one of the catchers on the great New York Yankees teams of 1928 and 1929.

He first reached the major leagues with the St. Louis Browns in 1929 and played with them until 1924, hitting .238 over six seasons. He was never a regular, peaking at 85 games and 181 at bats in 1923. The increased playing time did not do him any good, as he hit a paltry .177, after hitting .307 in 63 games in 1922. On June 8, 1923, he made history by becoming the only man to pinch run and pinch hit in the same game. Facing the Philadelphia Athletics at Shibe Park, Pat briefly ran for teammate Homer Ezzell in the third inning when he needed to use the restroom. In the ninth, Connie Mack allowed the Browns to let him pinch hit for pitcher Ray Kolp, drawing a walk. Ultimately, he was kept around as the backup to Hank Severeid during this timespan. In 1925, he was waived to the St. Paul Saints of the American Association and had a good season, hitting .316 in 132 games. The Yankees acquired him at the end of the season in a trade for Pee Wee Wanninger, although he did not make his debut until the following year.

Benny Bengough won the Yankees' catching job in 1925, taking over for Wally Schang, and Collins was acquired to be his backup in 1926. Bengough was bothered by a sore arm, and Collins got the bulk of the playing time, 102 games, during which he hit .286 with 7 homers and 35 RBI. He was there for his defense, as the team had plentiful other sources of offense, but he too began to develop a sore arm. With Bengough's health also in doubt, the Yankees acquired Severeid from the Browns, and he ended up catching in the 1926 World Series. Severeid was released after the season, and in 1927, catching duties were shared among three players, Collins, Bengough and newly-acquired Johnny Grabowski. Collins played 92 games, hitting .275 with 7 homers and 36 RBI. He got to start Game 1 of the World Series against the Pittsburgh Pirates, Bengough got the assignment in Game 2, then Grabowski in Game 3, and Collins again in Game 4. The three catchers were hitless in the first three games, but Collins came through with a three-hit performance in the finale as Murderers Row completed an emphatic sweep of the Bucs. The same trio was back in 1928, and Collins played 70 games (136 at bats) and hitting .221 with 6 homers. The Yankees repeated as pennant winners, but Bengough started all four games of the World Series against the St. Louis Cardinals. Collins got to catch the final innings of Game 4, hitting a double in his only at bat. It was his last game as a Yankee, as future Hall of Famer Bill Dickey came up in 1929, making him expendable. He was sold to the Boston Braves and finished his major league career with 7 games in 1929.