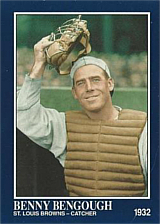 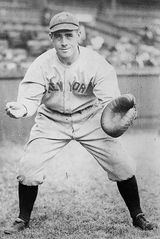 Bernard "Benny" Bengough played 10 seasons in the big leagues as a catcher. He is most famous for being part of the New York Yankees from 1923 to 1930 and appearing in the 1927 and 1928 World Series.

Bengough was born in Niagara Falls, NY and attended Niagara University. In his youth, before entering baseball, Benny considered a career as a Catholic priest. Much later, he died of a massive heart attack on a Sunday afternoon, in church, after attending Catholic Mass. Starting at age 18, he played six years for the Buffalo Bisons before coming to the majors in 1923. As a youth, he much admired Hank Gowdy, who was Buffalo's catcher and served as his model.

Bengough first came up to the Yankees in 1923, as a back-up to Wally Schang, and, in a little-known fact, became a regular the same day as Lou Gehrig replaced Wally Pipp in the lineup, June 2, 1925. The Yankees had been playing poorly and manager Miller Huggins took advantage of an injury suffered by Pipp to shake up his team by putting in a couple of younger players in Gehrig and Bengough. While not nearly as good a player as the "Iron Horse", Bengough was a fine defensive catcher who was an excellent handler of pitchers. He played well enough for the remainder of the season, hitting .258 in 95 games, that Huggins could trade away the veteran Schang after the season. Benny was supposed to be the starter in 1926, but he was bothered by a sore arm that cut down his playing time, and then his season ended early when he was hit by a pitch from George Uhle on September 18th, breaking his right wrist. He was hitting an outstanding .381 (in only 84 at-bats), but Pat Collins had received most of the playing time; as Collins also had a sore elbow, the Yankees picked up another veteran on the waiver wire in late July, Hank Severeid, and he ended up starting all 6 games of the 1926 World Series.

Bengough was back in full health in 1927 and part of an unusual three-man arrangement for the Yankees' catching duties that year. They had acquired Johnny Grabowski in the offseason to take Severeid's place and now had three catchers with similar skill sets: right-handed hitters who were good defenders with little power. Huggins rotated the three and together they combined for a .271 average, 7 homers and 71 RBI; Benny was the least used, hitting .247 with 10 RBI in 31 games. He did get to start Game 2 of the 1927 World Series after Collins started Game 1; Grabowski then started Game 3, and Collins was back behind the plate as the Yankees completed a four-game sweep of the Pittsburgh Pirates. That team is usually considered among the greatest of all-time, but its catching combination was less than overwhelming. The three were retained for the 1928 season, with Bengough hitting .267 in 58 games. He was the man in the World Series, catching all four games as the Yankees swept the St. Louis Cardinals in four. Future Hall of Famer Bill Dickey joined the Yankees in 1929, and it was clear Bengough's days were numbered. He did stay as Dickey's back-up in 1929 and 1930, then moved to the St. Louis Browns in 1931, playing there until the end of the 1932 season.

Some sources refer to him as "Bennie".