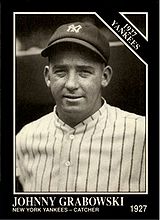 Catcher Johnny Grabowski started out his professional baseball career in 1922 with the St. Joseph Saints of the class A Western League. His rookie year saw him catch in 100 games, fielding at a .955 clip. He got in 339 at bats with 98 hits for a .289 average.

The respectable first year got him on the Minneapolis Millers AA American Association roster for the 1923 season, where he hit for a .316 average, getting 100 hits in 316 at bats. His fielding again was reliable at a .954 pace in 93 games. Grabowski suited up again in 1924 with the Millers, hitting .319 in 50 games before being traded on July 6th, along with Leo Mangum to the Chicago White Sox for Doug McWeeny and Kettle Wirts. The catcher finished out the year with the Chicago club, getting into 20 games and batting .250.

John Grabowski spent all of the 1925 and 1926 seasons with the White Sox team, hitting .304 the first year and .262 the second. The unexpected came about on January 13, 1927 when he was traded along with Ray Morehart to the New York Yankees for Aaron Ward.

In New York, Johnny became part of a catching trio that also included Pat Collins and Benny Bengough. Known more for his defense then his hitting, Johnny did have 25 RBIs in 1927 along with a .277 batting mark. He got into 70 games that year and started Game 3 of the World Series agaisnt the Pittsburgh Pirates (he went 0 foe 2). In 1928 he got into 75 games but his average dropped off to .238 with 21 RBIs. The Yankees won the World Series in four-game sweeps both of these years, and the 1927 edition, which won 110 games, is considered to be among the greatest teams of all time. Grabowski was not used much in 1929, getting into only 22 games and hitting .203 as a young Bill Dickey came up with the team and relegated the three incumbents to the sidelines.

His stint with the Yankees was over and he played the 1930 season with the St. Paul Saints of the American Associatio]. Grabowski got into 102 games with 339 at bats, hitting .289.

The Detroit Tigers took a chance on him in 1931, but he got into only 40 games, hitting .235 and this signified the end of his big league career.

Grabowski got two more years of pro ball in, playing with the Montreal Royals of the AA International League in 1932 and 1933. This was the end of a 12-year playing career.

Johnny Grabowski turned to umpiring shortly after his playing career ended and had many successful years, working in the Canadian-American League, Eastern League and the International League.

In May, 1946, a fire broke out in Grabowski's home in Guilderland, NY. In the effort to save his home, Grabowski was engulfed by the fire and died a few days later while in the hospital. He was 46 years old.