Lourdes Gourriel was a long-time star in Cuba, winning two batting titles and retiring among the top 20 all-time in average, homers, doubles, hits, total bases and runs. He played for the Cuban national team for over 15 years, twice being MVP of international events and coming up with numerous starring performances, perhaps doing better in international competition than he had done in his amazing career in the Cuban leagues. He then became a successful manager. He also has become known for the feats of his sons, Yulieski Gourriel, Lourdes Gourriel Jr. and Yuniesky Gourriel. He is also the brother of Luis Enrique Gourriel, the nephew of José R. Delgado and the cousin of Yoannys Delgado. 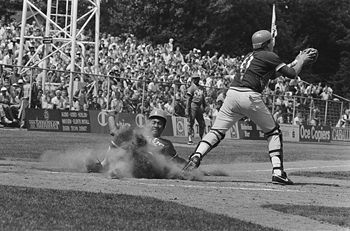 Gourriel scores while catcher Jose Lorenzana tries for the out. Taken at the 1986 Harlem Baseball Week

Lourdes Gourriel first starred as a teenager. In the 1976-1977 Cuban Serie Nacional, he won the Rookie of the Year award for Azucareros. In 1978-1979, he hit 12 doubles to tie Armando Capiró and Jorge Beltrán for the Serie Nacional lead. He debuted with the Cuban national team that year, hitting .294 in the 1979 Intercontinental Cup.

Getting better with age[edit]

Gourriel dazzled in the 1988 Baseball World Cup. He hit .500/.579/1.000 to lead in slugging. He also hit two major home runs. In the last round-robin game, he came up with two on, one out and a 9-6 deficit in the 9th inning, then smashed a 3-run homer off of Joe Slusarski to tie it; Cuba would go on to beat Team USA. In the Gold Medal game, he hit a game-tying homer in the 9th against Jim Abbott to again ruin America's hopes. He made the tourney All-Star team, joining Luis Casanova and Daisuke Tsutsui in the outfield.

In the 1989 Intercontinental Cup, Lourdes again was in the All-Star outfield, having hit .435 and slugged .913. In the finale against Japan, he drove in four of Cuba's 8 runs. He was 5th in the tournament in average. He won the MVP award for the tourney. In the 1989-1990 National Series, he drew 8 intentional walks to tie Alejo O'Reilly for the lead in his region.

He batted .429 in the 1990 Central American and Caribbean Games. In the 1990 Baseball World Cup, Gourriel hit .463/.522/.902 for the Gold Medalists with 12 runs and 19 RBI in 10 games. He tied Antonio Pacheco for third in homers (4), trailing Orestes Kindelan and Omar Linares. He led with 25 hits and trailed only Kindelan in RBI. He made the All-Star team as the best first baseman in the competition. He played for Cuba in the 1990 Goodwill Games when they won Gold.

During the 1991 Pan-American Games, the 34-year-old veteran hit .,419 and tied Kindelan and Chris Roberts for the lead with four homers. He made the All-Star team as the top first baseman.

In the 1992 Olympics, Gourriel batted .400/.439/.692 with 9 runs and 10 RBI in nine games as the #5 hitter and first baseman for the Gold Medal Cubans, including a 3 for 5 effort against Taiwan in the finals. He easily outhit Team USA first baseman Jason Giambi.

In the 1993 Intercontinental Cup, Gourriel hit .390/.391/.683 as the DH for the champions. He tied Linares for 4th with 16 RBI and tied for fourth with three homers. He was the tournament's All-Star DH, giving him five All-Star nods in the past five major international tourneys he had played in (excluding the Olympics, which did not name an All-Star; he would have been a likely choice at first). In the 1993 Central American Games, he batted .444 and led with 12 hits.

The old-timer kept on hitting in 1993-1994, winning a National Series batting crown (.395) and also leading in doubles (19). He was named the Serie Nacional Most Valuable Player.

In the 1994 Baseball World Cup, the 37-year-old remained at the top of his game, winning the MVP honors after hitting .429/.488/.881 with 4 homers, 15 runs and 18 RBI in 10 games. He led the Cup in RBI, tied for the lead in triples (2), tied for third in hits and tied for fifth in home runs. He was chosen as the All-Star DH for his sixth All-Star selection in his last six major world tournaments that picked an All-Star team.

After retiring as a player, Gourriel became a manager. He guided Centrales to a 2003 Super League title. He also managed Sancti Spiritus, for which his sons played. He coached for Cuba in the 2005 Baseball World Cup and 2009 World Baseball Classic.

This biographical article is missing the person's: throwing hand
Retrieved from "https://www.baseball-reference.com/bpv/index.php?title=Lourdes_Gourriel_Sr.&oldid=1074531"
Categories: