Keino Perez has pitched in the minor leagues, the Netherlands and France as well as his native Venezuela. His brother Randy Perez played in the minors and France. Perez is the French League's all time leader in wins (115) and strikeouts (978). He has managed the Rouen Huskies to 6 French titles in 7 seasons, reaching the European Final Four in 2012, his first season with the club.

Perez moved to France's Rouen Huskies in 2005 and won titles every year from 2005-2013. In the 2007 European Cup, he allowed three runs in nine innings while walking 7 in a win over host T & A San Marino in the round-robin. In the semifinals, he saved a 4-3 win over Telemarket Rimini, working 2 1/3 scoreless innings. In the 2007 Division Elite season, he was the ace for the champion Rouen club, going 9-1 with a save and a 2.01 ERA and whiffing 100 in 89 2/3 IP. He was third in ERA and second to Samuel Meurant in strikeouts.

In the 2008 European Cup, Perez topped the Mainz Athletics in a complete game win in Rouen's first contest. In the Bronze Medal game, he dropped a 3-1 decision to T & A San Marino. Overall, he had a 1.12 ERA in the Cup. 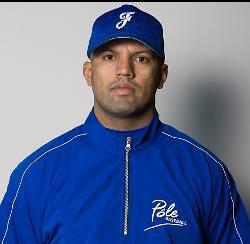 Keino Perez in uniform at the Rouen academy 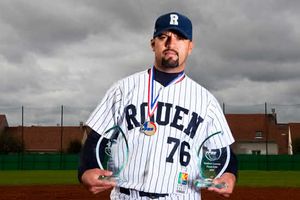 Keino and his awards for the 2009 Division Elite finals.

Playing for the Rouen Huskies in 2009, Keino would win both the MVP and Best Pitcher awards in the 2009 finals against the Lions de Savigny-sur-Orge and Rouen yet again were crowned kings of France.

Keino Perez was a key starting pitcher for Rouen in 2010 and 2011, years in which Rouen again won the French Championship. In 2012, Perez made the transition from player to player-coach (succeeding Robin Roy as Rouen manager). In his first year coaching Rouen, the Huskies finished 26-2 in the regular season, won the Challenge de France and French Championship. They became the first French club to make the European Final 4. Perez pitched mainly out of the bullpen as Rouen's closer. He pitched for France in the 2012 World Baseball Classic Qualifiers (1 BB, 1/3 IP). In 2013 Perez and Rouen again took home the Challenge de France and French Championship. In addition to coaching Rouen, Perez joined the French national team coaching staff. 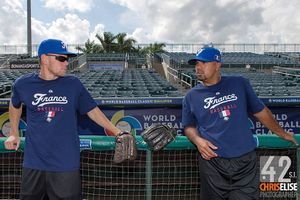 Owen Ozanich and Keino Perez playing for France in 2012. The two pitchers rank first and second in both wins and strikeouts in French history.

2014 saw Perez notch career win number 100 with Rouen. It also saw the Huskies streak of nine straight titles snapped as Rouen lost in the semi-finals. Perez pitched more than expected, logging 74.0 innings, posting a record of 7-2 with 57 K and a 1.09 ERA (Regular Season, Challenge de France and Playoffs). In September, Perez was the third base coach for France in the 2014 European Championship. France, now coached by Kieran Mattison, made some noise by beating the Netherlands and finishing sixth with a team many considered to be the strongest ever put on the field by "Les Bleus"

In 2015 Perez's Rouen Huskies posted the best winning percentage in club history, winning both the Challenge de France and French Championship on the way to a 37-2 overall record. For his efforts in the Challenge, Perez was named best pitcher. Overall in 2015 Perez pitched only when needed, but put up impressive numbers for a 36 year old: 16.1 IP, 9 H, 1 ER, 5 BB, 6 K, 2-0, 0.55 ERA. In July 2015, Perez was named manager of the French University team which took part in the World University Games which participated in the Universiades in Gwangju, South Korea.

In 2017, Perez once again managed the French University team which traveled to Taipei, Taiwan. There, the underdog French squad defeated the home team Chinese Taipei 4-3 in a game started by Perez's Rouen starter Owen Ozanich. For the tournament the French finished 3-4 with wins over Taiwan, Russia and Mexico. On the mound for the Huskies, he logged 30.0 IP, went 3-0, striking out 25 while only handing out 5 free passes on the way to a very impressive 1.20 ERA. Perez was the winning pitcher in relief in game 7 of the French Series against Senart.

In 2018, Perez had a bit of a down year on the mound, seeing his ERA jump to 6.40 (28 ER in 39.1 IP in all competitions) while going 3-6 for an otherwise very impressive Rouen Huskies pitching staff. He managed the team to a 4th place finish in the European Champions Cup, while also winning the Challenge de France and French Series. For his efforts as manager, Perez was named manager of the year by the FFBS. 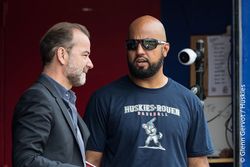 For his career, Perez leads the French league with 115 victories (115-32 record). He has an impressive 2.34 ERA, 978 K in 1,395.2 IP for Rouen (all competitions thru 2018 season). Along with managing the Huskies, he is in charge of the Normandie Baseball Academy and Pole Baseball Rouen along with Rouen catcher Dylan Gleeson. In addition to managing the French University team in 2015 and 2017, Perez also pitched for France in the 2013 and 2017 World Baseball Classic Qualifiers. In March 2016 in Panama, he relieved Leonel Cespedes in the bottom of the 5th with a 5-0 lead, two outs and the based loaded against Spain. He walked Luis Guillorme to force in Spain's first run but got Jesús Ustariz out on a fly to escape further damage. In the 6th, he retired Yunesky Sanchez, allowed a single to Engel Beltre, fanned Jesús Golindano, gave up a hit to Blake Ochoa and walked Yasser Gomez to load the bases. Esteban Prioul relieved, and let an inherited runner score. France wound up with a 5-3 upset win, their first ever in a World Baseball Classic qualifier.

Perez will continue pitching for Rouen out of the bullpen in 2019, while managing his Huskies in a now expanded 12-team French Division 1. The club will participate in the 2019 Champions Cup held in Bologna, Italy in June.