Robin Roy was a member of the French national team for several years. He has played for and been head coach of the Rouen Huskies. His son Alexandre Roy signed with the Seattle Mariners in 2012. [2]

« C’EST NOTRE ZIDANE A NOUS » ("He's our Zidane", comparing him to the famous soccer player Zinédine Zidane) Xavier Rolland, president of the Rouen Huskies, commenting on his return to the club in 2009 [3]

He started playing for the Quebec junior team in the 1980's, and was awarded the Order of Merit from the town of Blainville, Quebec in 1987 for his talents on the junior team. [4]

Roy pitched for France in the 1997 Intercontinental Cup, allowing 28 runs in 8 innings and going 0-2. He allowed 30 hits and 9 walks in posting the worst ERA on a bad French staff. Playing DH a couple times, he went 2 for 9 with a home run. [6] He was the All-Star right-handed pitcher of the 1999 European Championship, which he led in ERA, allowing no runs in 9 innings while striking out 17 and allowing only 2 hits and a walk. 8 of those innings and all the Ks came against a Russian national team that finished 4th in the event, just behind France. He helped France to its first Bronze Medal (or Medal of any kind) in a European Championship. (As of 2008, France has yet to duplicate the feat) [7]

He was superb as well in the 2003 European Championship (2-0, 0.46 ERA, 25 K in 19 2/3 IP); the rest of the staff was 1-5. He had the best ERA of any hurler who allowed a run in the tourney, was 4th in K/IP (behind Silvio Censale, Magnus Pilegård and Tetsuhiro Monna), was second in IP (1/3 behind Monna), tied for first in wins (with Dennis van Hoof, Tom Lyons, Censale, Monna, Patrick Beljaards and Pedro Pablo Belmonte), was second in Ks (one shy of Monna), was third in walks (9, behind Tim Henkenjohann and Vladimir Petrov) and tied for first in shutouts (1, even with Roger Kops, Javier Civit, Petr Pacas and Eelco Jansen). Jansen was named the tourney's All-Star RHP. [8] 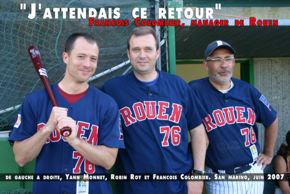 As a pitcher for Rouen76 in Division Elite, Robin Roy was awarded the MVP for the Finals in both 2003 and 2006. [9] He retired following 2006. The next year, he battled testicular cancer and required both surgery and chemotherapy. [10] In January 2009, Roy came out of retirement to join Rouen once more. [11]

He is married to Fabienne, and has 3 children (Alexandre, Quentin and Antoine).[12]