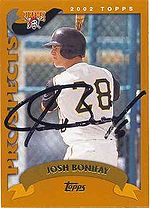 Josh Bonifay is the son of Cam Bonifay, the brother of Jonathan Bonifay, the grandson of Bob Bonifay, the nephew of Brannon Bonifay, and the cousin of Ken Bonifay. He spent four seasons at AA, once hitting 25 homers there, but never made it further as a player. He cracked 133 minor league home runs and had a 842 OPS in eight seasons. He later coached.

In 2002, Bonifay's father was out of the Pirates organization after losing his general manager job, but Josh had his best year yet. He hit .307/.388/.557 with 36 doubles, 26 home runs, 83 runs, 63 walks and 102 RBI. About the only negative was his .941 fielding percentage at second. He led Pirates farmhands in circuit clouts and was among the Carolina League leaders in homers (first), RBI (first), extra-base hits (first), slugging (second to Brad Hawpe), total bases (258, second, 6 behind Hawpe), walks (3rd), runs (4th), average (5th), OBP (5th) and doubles (5th). He was named the league's All-Star second baseman, though Hawpe beat him out for MVP honors. He helped lead Lynchburg to the title. He had been the star batter on a team loaded with future major leaguers such as Ronny Paulino, Castillo, Yurendell de Caster and Chris Duffy.

Bonifay began his long AA career in 2003 with the Altoona Curve, hitting .285/.348/.448 with 30 doubles while moving back to the outfield. Josh slugged 19 homers in 2004, hitting .277/.360/.490 while fielding .993 at his new position, first base. He was one homer shy of team leader Ray Sadler. Six of the other seven regular position players would wind up in the big leagues, but not Bonifay, the club leader in slugging.

Bonifay ended his Altoona run in 2005, producing at a .282/.339/.556 rate with 25 homers and 77 RBI. He led his club in homers, two ahead of 2010 MLB leader Jose Bautista. Josh was third in the Eastern League in slugging (behind Randy Ruiz and Mike Jacobs and tied Jacobs for 4th in homers (behind Shelley Duncan, Ruiz and Jonathan Van Every). He failed to win All-Star honors at first, as those went to Duncan.

For 2006, the veteran minor leaguer signed with the Houston Astros. He hit .261/.318/.480 with 18 home runs as a utility infielder for the Corpus Christi Hooks that year. In game four of the Texas League finals, Josh started a 9th-inning triple play to give Corpus Christi the title, starting by snaring a liner from Alex Gordon. Overall, he had batted .284/.355/.487 in a productive minor league run.

Bonifay later returned to the Pirates chain as a coach, with the 2008 Hickory Crawdads and 2010 West Virginia Power. He moved to the Astros as coach of the Greeneville Astros in 2011 Lexington Legends in 2012. Bonifay returned to Greeneville in 2013-2014, this time as manager.