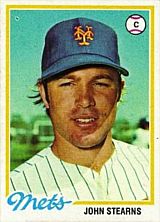 Drafted in the 13th round of the 1969 amateur draft by the Oakland A's, John Stearns did not sign and attended the University of Colorado. In 1972, John hit .352, second in the Basin League in Summer Collegiate Baseball. After starring in baseball and football at Colorado, Stearns was drafted by the NFL's Buffalo Bills as a defensive back and was the second overall pick of the 1973 amateur draft, taken by the Philadelphia Phillies.

Immediately sent to Double A, Stearns had 7 passed balls in 31 games behind the plate and hit .241/~.406/.386, showing excellent plate discipline (46 bases on balls in 207 plate appearances). He also played first base, third base and the outfield. In 1974, John batted .343/~.447/.500 for the Rocky Mount Phillies and .266/~.336/.345 for the Toledo Mud Hens. Stearns joined Gary Carter as one of the International League All-Star catchers after the year, then was promoted to the Phillies, where he went 1 for 2. That offseason, he was dealt to the New York Mets as part of a six-player deal in which Stearns and Tug McGraw were the primary objects, as Bob Boone held down the Philadelphia catching job.

In 2003, Stearns became manager of the Binghamton Mets and they finished 63-78. Moving to the Norfolk Tides in 2004, Stearns' club finished 72-72. In 2005, he was New York's minor league catching coordinator. Switching to the Washington Nationals chain in 2006, Stearns became manager of the Harrisburg Senators. The next season, he was promoted to skipper of the Triple A Columbus Clippers. In 2010-2011 Stearns was a scout for the Seattle Mariners. In 2012, he became the Mariners' minor league catching coordinator and in 2014 was named to the coaching staff at the major league level as Lloyd McClendon's third base coach. Stearns resigned the position in spring training though, as he recovered from hernia surgery.

His brother, Bill Stearns, was a catcher who advanced as far as Triple A.