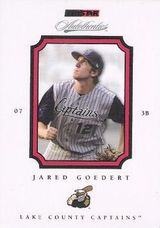 Jared Goedert's father, Joe Goedert, also played baseball for Cloud County Community College and Kansas State University. He still holds the Cloud record for a single season batting average with .510 in 1979. In 1980, Joe had a down year with the T-Birds and only hit .474 for the season. In 2008, Joe was inducted into the Cloud County Community College Athletic Hall of Fame.

Jared is the oldest of Joe and Janell Goedert's four sons. The other boys are named Keaton, Corbin, and Connor. The family's last name is pronounced "GED-ert".

Goedert was a starter all four years at Concordia High School in Concordia, Kansas. In three of those years, he was selected to the all-league team, and twice he achieved all-state honors. During his senior year, Goedert hit .538 with 11 home runs and was named the team MVP. He holds the single season walks record for the school. The Cleveland Indians chose Goedert as their pick in the 36th round (1068th overall) of the 2003 draft.

Goedert was also a quarterback on his high school football team and led the state of Kansas in passing yards when he was still a junior. During his senior year, he was chosen for the all-state team.

Jared was also a standout in basketball and was named to the all-state basketball team. His 19.50 points per game average was tops in the league, and his average of 2.65 steals per game was good enough for second among the league leaders.

Rather than sign with the Indians, Goedert opted to play college ball in 2004. As his father did before him, Jared began his collegiate career at Cloud County Community College in his hometown of Concordia. He hit .431 with a single season school record of 77 hits while striking out only 13 times in 178 at-bats. He also tied the record for games played in a season with 56. For his efforts, he received all-conference and all-region honors and was named as an All-America honorable mention while also making the Academic All-American team.

Goedert transferred to Kansas State University for the 2005 season. He played both first and second base as a Wildcat and completed the campaign with a .341 batting average, .423 OBP, and a .492 slugging percentage.

Goedert spent the summer of 2005 as a member of the Hays Larks in the collegiate Jayhawk League. While there, Jared had a .482 OBP and a .633 slugging percentage with 19 doubles, 52 RBI, and 54 runs scored. He was named a First Team Summer All-American by Baseball America.

2006 saw Jared improve both his on-base (.466) and slugging percentages (.609) significantly while hitting at a .337 pace. He tripled his home run output from four to twelve and also stole six bases along the way. Three of Jared's homers came during a single game against South Dakota State University on May 16. While with Kansas, Goedert earned a reputation for playing through pain as he endured a broken nose twice while there as well as a torn tendon in his index finger.

At the time that he left school, Goedert was majoring in finance.

Cleveland was still impressed with Goedert. In the 2006 amateur draft, they selected him in the ninth round (281st overall). He decided to accept Cleveland's offer of a $70,000 signing bonus and left school early. That summer, Jared jumped into the Indians' farm system with the Mahoning Valley Scrappers and got his professional feet wet with a .269 batting average in 63 games. In the fall, he had labrum surgery performed.

The Lake County Captains welcomed Goedert in 2007. Jared hit at a .364 pace in 46 games with 16 home runs and 51 RBI. This earned him a promotion up to the High-A Kinston Indians. In one of his last games for Lake County, Jared reaggravated his surgically repaired shoulder on a diving play, and this caused a month-long layoff and reduced production (.256 BA, 4 HR) in the 35 games he had in the Carolina League. For the year, Goedert led the entire Indians minor league system in both walk percentage (16.4% of plate appearances) and on-base percentage (.430).

Goedert spent all of 2008 with Kinston where he led the KTribe in games played (126) and sacrifice flies (9). Jared was second on the team behind Beau Mills in runs, hits, and runs batted in and second to Nick Weglarz in walks. The hitting coach for Kinston, Jon Nunnally, considered Goedert a "doubles guy with power." Scouts considered fielding to be the one area that Goedert needed the most work in at this stage in his career. Through 2008, he had a .951 fielding percentage while playing over 190 games at third and over sixty at second. The Kinston press noted that unlike other players, Jared prefers reading to the usual music and cards when relaxing before games.

Goedert started the 2009 campaign with the Akron Aeros. On April 16, the team put him on the disabled list with a right oblique strain.