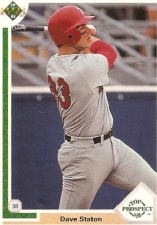 First baseman Dave Staton was selected by the Pittsburgh Pirates in 22nd Round of the 1988 amateur draft, but did not sign. He instead signed with the San Diego Padres after being drafted in the 5th round of the '89 draft. In his first pro season, 1989, he won the Northwest League triple crown while playing for the Spokane Indians. He led the league with a .362 batting average, 17 home runs, and 72 RBI. Staton also led the league with a .627 slugging percentage and finished second in on-base percentage with .456 behind teammate Darrell Sherman (.459.)

Dave split 1990 between the Riverside Red Wave in the Single-A California League and the Wichita Wranglers of the AA Texas League. Combined, he batted .297 with 26 home runs and 95 RBI. Though he played only 92 games with the Red Wave, the 20 home runs he hit with the club were enough to tie him for 3rd in the league.

He moved up to the AAA Las Vegas Stars in 1991 and moved to third base. Dave continued to show his big league hitting and power potential by hitting .267 with a team-leading 22 home runs.

In 1992 Staton hit a 490-foot home run that was brought to a sudden stop when it hit the top of the scoreboard. It is estimated that without the scoreboard stopping it, the ball would have traveled at least 550 feet.

The Padres needed to find a position for Staton, they had stars Fred McGriff at first base and Gary Sheffield at third, and he seemed to lack the footwork necessary to play the infield. They moved him to left field for the 1992 season. Left field was a position at which the Padres were much weaker, but a position Staton hadn't played since Little League. They had used a flock of subpar major league outfielders and utility men in 1991 including Oscar Azocar, Jerald Clark, Thomas Howard, Kevin Ward and Mike Aldrete. He made his major league debut with the team in 1993 and also played briefly for them in 1994, but in those two seasons, he hit just .213 in 46 games combined.