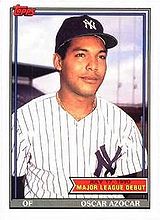 He was signed as a free agent for the New York Yankees by scout Fred Ferreira on November 22, 1983. Originally a pitcher in the minor leagues from 1984 to 1986, he went 14-5 with a 2.31 ERA. He began playing the outfield in 1987 and hit .359 for the Fort Lauderdale Yankees. In 1990, he played 94 games for the Triple A Columbus Clippers and was called up to the majors. He made his debut July 17th, getting a pinch-hit single in his first at-bat against the Kansas City Royals. The following day, he homered, doubled, and singled against the Royals. Overall, he appeared in 65 games for the Yankees that summer and was used more than any other player in left field by the Yanks, who also played Mel Hall, Hensley Meulens, Claudell Washington, Deion Sanders and Hall of Famer Dave Winfield (among others) at the position. He hit for a good average, but hardly drew any walks, which diminished his value as a player significantly, especially as he had little power. Oscar was traded to the San Diego Padres for Mike Humphreys after the 1990 season, and appeared in 38 games for San Diego in 1991, while also playing 107 games for the Las Vegas Stars. In 1992, he was in the majors the whole season with the Padres, appearing in 99 games, although only 37 were in the field. Overall, he batted .226/.248/.296 in 202 big league games, with his five big league home runs coming in his lone season in pinstripes.

Azócar holds the record for career stolen bases without being caught with 10, although caught stealing records are incomplete before 1951. He also played in the Venezuelan League, becoming a star with Magallanes. He later played several years in the Mexican League, ending his career in 2001. In 2010, he was inducted into the Caribbean Baseball Hall of Fame. He died later that year in Venezuela from a heart attack at the age of 45.

While David Aardsma is the first major league player listed alphabetically under "A", Azócar is (through 2019) the last one.