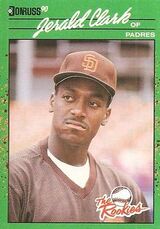 Jerald Clark was a 12th round pick in the 1985 amateur draft by the San Diego Padres and director of minor league scouting Tom Romenesko. The brother of |Phil Clark and minor leaguer Isaiah Clark, Jerald only briefly broke into the Padres' outfield rotation, never posting an OBP higher than .300 in parts of five seasons out west. He was the Colorado Rockies' 7th pick in the 1992 expansion draft and did fairly well in Denver, batting .282/.324/.444 with career highs all across the board in the counting stats. Despite the outburst, he was not back the following season, instead spending 1994 with the Yakult Swallows where he put up a solid .293/.333/.497 line with 20 home runs. He finished his big league days with a brief, outstanding look with the Minnesota Twins in 1995, batting .339/.354/.550 in 36 games.