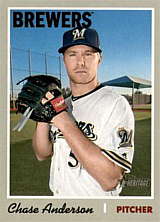 Pitcher Chase Anderson was a winner in his major league debut in 2014.

Chase had a 5-4, 2.86 record for the Mobile BayBears in 2012, walking 25 in 104 innings and missing almost a month with strained right elbow. Had he qualified, he would have led the Southern League in ERA by .05 over Gary Moran. Baseball America ranked him the #11 prospect in the Arizona chain and again having the best changeup in their system. He was 3-1 with a 3.47 ERA for the Salt River Rafters of the Arizona Fall League. In 2013, Anderson was 4-7 with a 5.73 ERA in a rough AAA debut for the Reno Aces. He had two trips to the DL with a right triceps injury. He was back down in AA with Mobile in 2014 but began on a superb note (4-2, 0.69, 38 K, 22 H, 6 BB in 39 innings) and was called up to Arizona when Mike Bolsinger was demoted.

Chase was a winner in his major league debut, May 11, 2014, pitching for the Diamondbacks against the Chicago White Sox. He gave up only 2 hits in 5 1/3 innings, one of them a solo homer by Moises Sierra in the 6th, to be credited with a 5-1 win. He repeated as a winner in his next two starts, becoming the first pitcher in D-Backs history to win his first three career starts. A lot of run support from his teammates helped, as Arizona scored 18 times in his second start and 12 in his third. He made it four wins in four starts with his best performance on June 3rd, as he beat the Colorado Rockies, 4-2, while completing 6 innings for the first time - it was in fact his first quality start. He also won his next start, June 8th, to become the first hurler since Jered Weaver in 2006 to win his first five big league starts. He ended the year with a record of 9-7, 4.01 in 21 starts, logging 114 1/3 innings. In 2015, he made 27 starts and pitched 152 2/3 innings for Arizona, but only had 12 decisions, finishing 6-6 with a 4.30 ERA. He struck out 111 after harvesting 104 K as a rookie.

On January 31, 2016, he was traded to the Milwaukee Brewers, along with second baseman Aaron Hill and prospect Isan Diaz, in return for shortstop Jean Segura and pitcher Tyler Wagner. On May 16th, he pitched the best game of his career against the Chicago Cubs, owners of the best record in the majors at the time, taking a no-hitter into the 8th inning and enduring 8 2/3 innings in a 4-2 win that snapped a personal five-game losing streak. Ben Zobrist broke his bid for immortality with a double on the first pitch of the 8th inning; he then allowed solo homers to Jason Heyward and Kris Bryant in the 9th, losing his bid for a shutout and departed for Jeremy Jeffress to close the door. In 31 games, he went 9-11, 4.39, pitching 151 2/3 innings.

On May 27, 2017, he took a no-hitter into the 8th inning against the Arizona Diamondbacks before Nick Ahmed led off with a single. He also struck out a career-high 11 batters in a 6-1 win. He followed with another strong performance on June 1st, tossing seven scoreless innings in a 2-1 win over the New York Mets. He extended his scoreless streak to 21 2/3 innings on June 6th with 7 2/3 scoreless against the San Francisco Giants, but it ended at 22 innings in his next start when he gave up a run in the bottom of the 1st against his old mates, the Diamondbacks. On June 29th, he went on the disabled list with a strained oblique muscle, and did not return until August 20th. He continued to do well after his return, finishing the season at 12-4, 2.74 in 25 starts. He became the team's de facto ace when Jimmy Nelson went down with a season-ending injury in early September and was solid as the Brewers fell just short in their quest for a postseason slot.

In 2018, with Nelson still recovering from his injury, he was named the Brewers' Opening Day starter, facing the San Diego Padres on March 29th. Anderson made 30 starts and went 9-8, 3.93 in 158 innings, but also led the Nationals League in homers allowed with 30. When it came time to draw up the pitching rotation for the postseason, Anderson was left on the side and did not pitch at all as the Brewers made it to within one game of the World Series. He was back starting regularly in 2019, with 27 starts in 32 appearances and 139 innings. He went 8-4, 4.21, and again did not pitch in the postseason, although this time the Brewers played just one game, losing the Wild Card Game to the Washington Nationals, who would go on to win the World Series. On November 4h, he was traded to the Toronto Blue Jays in return for marginal prospect Chad Spanberger in what was clearly a cost-cutting move. However, he was joining a team that was desperate for some veteran pitching, having finished the previous season with a patched-up starting rotation made up entirely of rookies and other inexperienced pitchers.

He hit a snag when he rejoined the Blue Jays in July 2020 after the long layoff caused by the coronavirus pandemic, as he came down with a oblique strain, which was expected to make him miss at the least the first couple of weeks of the season. He made his debut on August 8th, starting against the Boston Red Sox at Fenway Park. He gave up 1 run in 3 innings as Toronto won the game, 2-1. He had a nightmarish inning on September 17th, when he served as the "bulk man" in a bullpen game against the New York Yankees. Following a 1st inning in which opener Julian Merryweather had allowed a couple of runs, he kept the Yankees off the scoreboard the next two frames, allowing the Jays to tie the score, but everything fell apart in the 4th when he tied a major league record by allowing 5 homers, including 3 on three consecutive pitches. The Yankees scored 7 runs in the inning and ended up 10-7 winners.