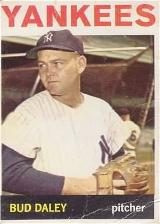 Before the 1951 season Bud Daley signed as an amateur free agent with the Cleveland Indians. The 18-year-old lefthander spent his first season with the class C Bakersfield Indians, where he appeared in 25 games, winning 9 and losing 10 with a 5.54 ERA.

He spent most of 1956 in the American Association with the AAA Indianapolis Indians, pitching 105 innings and winning 11 while losing only 1 with a 2.31 ERA and again got a look in Cleveland, going 1-0 this time with a 6.20 ERA.

Bud started the 1957 season with the San Diego Padres, going 3-0 with an 0.83 ERA and was called up to the Indians for one more chance. He didn't do so well, going 2-8 with a 3.75 ERA and was packaged up with Dick Williams and Gene Woodling and traded to the Baltimore Orioles for Larry Doby and Don Ferrarese. In two weeks, April 17, 1958, the Orioles moved him to the Kansas City Athletics for Arnie Portocarrero.

Bud became the ace of the lowly Kansas City Athletics' staff, winning 16 games in both 1959 and 1960 and taking part in the All-Star Game both years. Although he was a lefty chucker, he was probably best remembered for his withered right arm. "That's because I was an instrument baby," said Daly in the book Sixty One, written by Tony Kubek with Terry Pluto. "When the doctor took me out of my mother's womb, the instrument slipped and pinched a nerve in my right shoulder. For the first six months of my life, my arm was paralyzed."

A junk ball pitcher, who threw a roundhouse curve and a knuckler, Bud went from the Athletics to the New York Yankees on June 14, 1961, for pitcher Art Ditmar and outfielder/third baseman Deron Johnson. Over the course of the 1961 and 1962 World Championship seasons, he went 15-14 for the Bombers, mostly as a starter. He won the pennant-clinching game in 1961 and in the World Series that year he was the winning pitcher in the fifth and final game over the Cincinnati Reds, working the final seven innings in long relief of starter Ralph Terry. Overall he allowed no runs in eight innings in three Series appearances.

When Bud and Pete Daley where batterymates in Kansas City, they were know as the only "Daley Double" in baseball. Bud moved to Lander, WY where he and his wife Dorothy, owned B&D Sprinklers, a lawn sprinkler company. As of January 2009, they were retired in Riverton, WY.