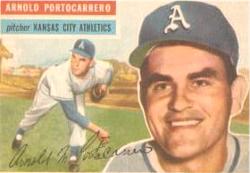 Arnie Portocarrero pitched seven seasons in the big leagues, mostly as a starter. His best season was 1958, when he went 15-11 for the Baltimore Orioles.

Portocarrero was signed as a free agent in 1949 by the Philadelphia Athletics and spent 1950 and 1951 in the minors. He was not in the minors in 1952 and 1953, spending time in the service during the Korean War.

In 1954 he made his major league debut in April, and as a rookie became the winningest pitcher for the Athletics who lost 103 games that year. Portocarrero won nine games while another rookie, Bob Trice, was second on the team in wins with seven. Portocarrero's ERA was lowest among the starters.

Traded to the Baltimore Orioles in April 1958, he had his best season, leading a below-.500 team with 15 victories. continued with the Orioles in 1959 and 1960 and then was in the minors in 1961 with the Rochester Red Wings.