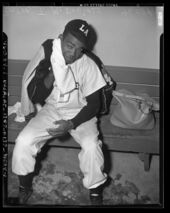 McDaniel debuted for the Kansas City Monarchs in 1940 at either age 27 or 26 (depending on your source). He was 1-0 in 1941. In 1942, the right-handed hurler went 6-0 with a 1.76 RA. He tied Jack Matchett for fourth in the Negro American League in wins and was second in RA to Matchett, beating out Satchel Paige. Surprisingly, he was not used in the 1942 Colored World Series, as the Monarchs only had Matchett, Paige and Hilton Smith work from the hill.

McDaniel appeared in his only East-West Game in 1945. The third of four West pitchers, he relieved Jessup and was replaced by Brewer. He entered with a 9-0 lead int he 7th but gave up one run in the 7th and 5 more in the 9th before getting yanked; on the day, he allowed six hits, two walks and six runs in 2 2/3 IP. He was 0 for 1 at the plate.

In the 1945-1946 Cuban Winter League, McDaniel was 9-7 for a last-place Marianao club that saw big leaguer Julio Moreno go 1-10. Booker was named one of the league's two All-Star pitchers, alongside Adrian Zabala.

The Arkansas native came to the Mexican League in 1946, the same year quite a few big leaguers made the same move. He went 14-16 with a 3.26 ERA for the Tuneros de San Luis Potosi, with 171 strikeouts and 176 walks in 234 1/3 innings. He set a Mexican League walk record, unbroken over 60 years later. He was second in the circuit in losses (two behind teammate Jorge Comellas, a former big leaguer) and led in strikeouts (14 ahead of Agapito Mayor and beating out the likes of Sal Maglie and Max Lanier.

In 1949, McDaniel became one of the first blacks in the Pacific Coast League since Jimmy Claxton in 1916; Artie Wilson, John Ritchey and Alonzo Perry also broke into the PCL that year. Booker was 8-9 with a 4.21 ERA, posting the lowest ERA on a Los Angeles Angels staff laden with major leaguers. McDaniel also hit .261 at the plate.