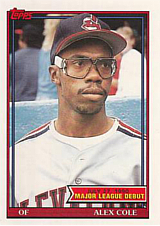 Outfielder Alex Cole stole 40 games in 63 games as a rookie in 1990. Though fleet of foot, he never was able to stick in one place as a regular, washing out after seven seasons.

Cole was signed as a 2nd round pick in the January 1985 amateur draft by the St. Louis Cardinals and scout Marty Maier. His minor league career got off on the right foot. In 1985, he hit .263 in 66 games for the Johnson City Cardinals of the Appalachian League and, by the end of 1986, he was holding his own in AAA. He started the year hitting .343 in 74 games for the St. Petersburg Cardinals of the Florida State League, then maintained a .250 average in 63 games for the Louisville Redbirds in the American Association. He then started moving backwards. In 1987, the Cards sent him to AA and he hit .256 for the Arkansas Travelers. In 1988, back in Louisville, he only hit .232. He was playing full-time both seasons, and for a player for whom batting average was a central part of his game, this was bad news. In 1989, he improved to .281 with Louisville, but had lost two years. He was traded to the San Diego Padres after the 1989 season, along with pitcher Steve Peters, for pitcher Omar Olivares. Alex proceeded to hit .290 in 90 games for the Las Vegas Stars early in 1990, then was traded again, this time to the Cleveland Indians, for backup catcher Tom Lampkin. Moved to the Colorado Springs SkySox, he was red hot in 14 games, hitting .429 and getting the call to the bigs.

When Alex made his major league debut with the Indians in July 1990, the Indians thought they had nabbed a future star. In a half season, he hit .300 in 63 games, with 40 steals and 43 runs scored. He was given the starting center field job in 1991, but slipped a notch, although he still hit .295 with a .386 OBP in 122 games. He stole 27 bases, but was caught 17 times, negating much of the value of his speed. In 1992, he hit only .206 in his first 41 games, and the Indians gave up on him, trading him to the Pittsburgh Pirates for a minor leaguer. He ended the season hitting .278 in 64 games and went 2-for-10 in the NLCS. Chosen in the expansion draft, Cole was the starting center fielder and number 2 hitter in the first game ever played by the Colorado Rockies against the New York Mets at Shea Stadium on April 5, 1993. He was the regular all year and hit .256 in 126 games, stealing 30 bases. It was his only season with the Rockies; he became a free agent and signed with the Minnesota Twins.

With the Twins in 1994, Cole finally hit his first major league homer in his 4th major league season, connecting off Juan Guzman of the Toronto Blue Jays on April 24th. He added three more dingers before the season came to a premature end in August because of the strike. Overall, he hit .296 with 68 runs scored and 29 steals. He returned to the Twins in 1995 and was hitting .360 after 25 games when he went down with an injury. He was back for a handful of games in late September, but had lost what was shaping up to be his best major league season. He signed with the Boston Red Sox and started the 1996 season with them, but hit only .222 in 24 games and was sent down to the Pawtucket Red Sox. He had played his last major league game at age 30. He continued to hit, as he always had, with Pawtucket, batting .296 with an OBP of almost .400 in 88 games, but he was released after the season. He played in the independent Northern League with the Madison Muskies in 1997, hitting .339 in 27 games, then got one final shot at organized baseball, but only hit .201 in 39 games with the Charlotte Knights. He later played three seasons with the Bridgeport Bluefish of the Atlantic League from 1999 to 2001.

Cole's baseball career ended when he was arrested on federal drug charges in 2001 prior to a game. He was later sentenced to 18 months in prison.