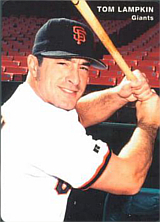 Catcher Tom Lampkin played 13 seasons in the big leagues. Late in his career, he was part of the great Seattle Mariners team of 2001 which won 116 games.

Lampkin was born in Cincinnati, OH but went to college at the University of Portland, where his time there overlapped with that of Steve Wilson. In addition to his major league career, Tom had quite a few seasons in the minors, including 1989 with the Colorado Springs Sky Sox, when he hit .321 in 63 games. In 1994 with the Phoenix Firebirds he hit .300 with 32 doubles.

In 1999 and 2000 with Seattle, he showed some power, hitting 16 home runs in 309 at-bats during those two seasons. That season, on July 17th, he hit the first triple in the history of Safeco Field, off Woody Williams of the San Diego Padres, in the 2nd inning. He was not known for his speed, hitting just 8 career triples and just 2 that season.

He was signed as a 11th round pick in the 1986 amateur draft by the Cleveland Indians and scout Dave Roberts.

As of 2011 he was coaching baseball at Union High School in Camas, WA.