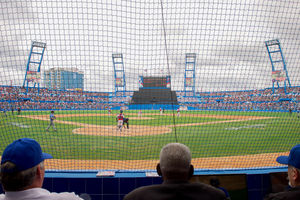 The 2016 Tampa Bay Rays-Cuban National Team Exhibition Game was an exhibition game played on March 22, 2016 at Estadio Latinoamericano in Havana, Cuba, between the Tampa Bay Rays, representing Major League Baseball, and the Cuban national team. Tampa Bay prevailed, 4-1, although the final score was incidental in relation with the historic nature of the contest.

Since the 1959 Cuban Revolution, only one major league team had ever played a game in Cuba, the Baltimore Orioles at the time of the 1999 Baltimore Orioles-Cuban National Team Exhibition Series. Such games were common before the Revolution, but the imposition of a trade embargo by the United States Congress and the dissolution of all professional teams in Cuba by Fidel Castro's communist regime led to a freeze in relations between Major League Baseball and Cuba. The Orioles' foray on the island in 1999 had taken place during a brief thaw in relations, but this had been short-lived and did not lead to any long-term improvements in relations. Indeed, in the early years of the 2000s the small trickle of defections of Cuban players to the United States became a flood as the communist regime, now led by Fidel's brother Raul Castro, began to show serious cracks. In 2014, President Barack Obama announced a major change in the United States' policy towards Cuba, proposing to reestablish diplomatic relations and work to lift the embargo, while recognizing that there were still major differences between the two countries, particularly on issues linked to human rights.

In March 2016, President Obama made a historic state visit to Cuba, becoming the first President to visit the island since Calvin Coolidge back in 1928. As part of this visit, knowing the deep love Cubans have for baseball and the century-long bonds woven by the sport between the two countries, he proposed that an exhibition game be held between a major league team and the Cuban national team during his visit. A number of MLB teams were interested in making the trip, and in the end it was the Rays who were selected in a blind draw by Commissioner Rob Manfred. 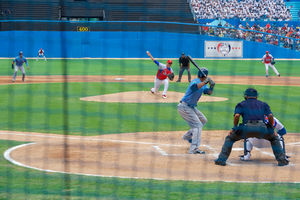 The game was held before a packed crowd estimated around 55,000 in Havana's venerable ballpark, which was spruced up for the occasion. Both Presidents were in attendance, Obama being accompanied by First Lady Michelle Obama and his two teenage daughters. The ceremonial first pitch was thrown by two Cuban-born pitching legends, Luis Tiant representing MLB and Pedro Luis Lazo for Cuba. There was a strange moment when the starting line-ups were introduced, as the Rays had decided to bring along minor league OF Dayron Varona, a Cuban defector, and have him start the symbolic game in right field. He was introduced to an eerie silence by the crowd, in sharp contrast with the fervor with which returning Cuban players had been received during goodwill trips in recent months. This was explained by the fact that ordinary Cubans were not in the stands: the free tickets had gone to persons with close ties with the ruling regime, who still believed the official line that defectors were traitors. So the Tampa Bay bench stood up and cheered when Varona led off the game (he flied out on the first pitch by Yosvani Torres). After that, the game was played in earnest, with the crowd loudly cheering the home team.

A mixed umpiring crew worked the game, with Cuban-American umpires Angel Hernandez and Lazaro Diaz representing MLB. A number of VIPs made the trip to Cuba, including Secretary of State John Kerry, Rachel Robinson, widow of Jackie Robinson (who had played in Cuba as a rookie during spring training in 1947, when he was about to break the color barrier), and former All-Stars Dave Winfield and Derek Jeter.

The game was quite one-sided however. Rays pitcher Matt Moore was having a good day, pitching 6 strong innings after encountering a bit of trouble in the 1st. 1B James Loney opened the scoring with a run-scoring single in the 2nd, then added a two-run homer in the 4th and Tampa never looked back. A solo homer by Rudy Reyes off reliever Alex Colome in the 9th accounted for Cuba's only run. However, the final score was incidental to the historical importance of the game, which was a tangible sign that major changes to a situation that had been stuck in time were finally under way.