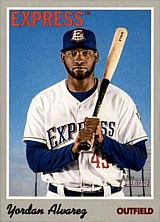 His first taste of organized baseball came in 2016 with the DSL Astros Orange of the Dominican Summer League where he hit .341 in 16 games. In 2017, he split his time between the Buies Creek Astros of the Florida State League and the Quad Cities River Bandits of the Midwest League, hitting a combined .304 in 90 games with 12 homers and 69 RBI. In 2018, he began the season with the Corpus Christi Hooks of the Texas League, where he hit .325 with 12 homers and 46 RBI in 43 games. That earned him a promotion to AAA and the Fresno Grizzlies of the Pacific Coast League. He played for the World team in the 2017 and 2018 Futures Game. In the second of these, he played the entire game at first base, going 1 for 3 with a walk. In 2018, between Corpus Christi and Fresno, he played 88 games and hit .293 with 20 bombs and 74 RBI.

He was back in the minors at the start of the 2019 season, not that he had anything left to prove in AAA, but the Astros were such a strong team that he could not break onto the roster. He proceeded to demolish PCL pitching over the first two months of the season, hitting .334 in 56 games, with 16 doubles, 23 homers and 71 RBI. On June 9th, he was finally given a chance to show what he could do in the Show, and did not waste it, hitting a two-run homer off Dylan Bundy of the Baltimore Orioles in his second at-bat to lead Houston to a 4-0 win. He homered again in his second game, June 11th, in a 10-8 win over the Milwaukee Brewers, thus becoming the first player in Astros history to go deep in his first two major league games. He added two more long balls in his next three games and finished June with a batting average of .317 in 16 games, 7 homers and 21 RBI, earning him the title of American League Rookie of the Month. On July 22nd, he broke a record set by Albert Pujols for most RBI in a player's first 30 games, when he drove in his 35th run in an 11-1 win over the Oakland Athletics. He repeated as Rookie of the Month in July, when he hit .333 with 5 homers and 15 RBI in 21 games; he also hit 7 doubles that month. On August 10th, he had a three-homer game in a 23-2 demolition of the Orioles; he scored 4 runs and drove in 7 in that game. The homers included a grand slam, and he now had 51 RBI in 45 games, beating the previous record of 47 set by Hall of Famer Ted Williams. He made it a trifecta of being named the Rookie of the Month when he won the award again in August, after hitting .309 with 9 homers and 26 RBI. On September 9th, the Astros set a record by homering 6 times in the first two innings of a game against the Oakland Athletics, and Álvarez was at the center of things, as he hit two of the long balls, the second of these - his 24th of the season - traveling 416 feet into the right field upper deck at Minute Maid Park, something only achieved one other time in the ballpark's history, by Jeromy Burnitz in 2000. The Astros ended up 15-0 winners. Overall, he batted .313/.412/.655 with 27 homers and 75 RBI and was named the American League Rookie of the Year. In the postseason, his bat cooled down as he hit just one homer in 18 games, that coming in the World Series against the Washington Nationals. Still, he did get his share of hits in the Division Series, when he went 6 for 19 (.316) and the Fall Classic (7 for 17, .412), although the ALCS was a complete write-off (1 for 22). Most of the hits were singles, however (he hit 3 doubles in addition to the single homer) and he only drove in 3 runs.

Alvarez then missed almost all of the 2020 season, only suiting up for 2 games during which he went 2 for 8 with a homer. He missed the first three weeks of the season after testing positive for COVID-19, then was shut down with a torn patellar tendon, before undergoing arthroscopic surgery on both knees. Heading into 2021, with the Astros having lost slugger George Springer to free agency, it was clear that they would need a return to form by Yordan, but that was far from a given as the team headed into spring training.