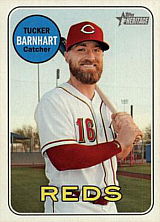 Catcher Tucker Barnhart reached the majors in 2014. He was a Gold Glove winner in 2017.

Tucker was a high school battery mate of Drew Storen (who was two years ahead) and was the recipient of the Indiana Mr. Baseball Award in 2009. That summer, he was selected by the Cincinnati Reds in the tenth round of the 2009 amateur draft, between Aaron Northcraft and Chris Sedon; the scout was Rick Sellers. He made his pro debut with the GCL Reds, hitting .208/.291/.250. In 2010, he hit .306/.412/.387 with the Billings Mustangs and threw out over one-half of attempted base stealers. With the 2011 Dayton Dragons, he batted .273/.344/.387, fielded .998 and threw out 47% of those who tried to steal. Baseball America rated him the top defensive catcher in the Reds chain, though they picked A.J. Jimenez as the top defender at the position in the Midwest League. He won the Rawlings Gold Glove as the top defensive backstop in all of the minors.

When Devin Mesoraco was injured early in 2014, Barnhart was called up to backup Brayan Pena at catcher. He made his major league debut as a starter, hitting 8th in a 7-6 loss to the St. Louis Cardinals on April 3rd. He was retired twice by Lance Lynn, once by Randy Choate and once by Pat Neshek while throwing out the only runner who tried to steal (Jon Jay). With Mesoraco battling injuries for much of his big league career, Barnhart gradually established himself as the regular in Cincy, agreeing to a four-year contract extension at the end of the 2017 season (with an option for 2022), a season in which he led all NL catchers in dWAR and caught stealing percentage while nabbing 32 would be base stealers. At season's end, he won his first Gold Glove. On the offensive side of the ledger, he had very similar seasons in 2016 and 2017, playing 115 and 121 games respectively, and hitting 23 and 24 doubles, 1 and 2 triples, and 7 homers.

In 2018, he played a career-high 138 games and batted .248 with 10 homers and 46 RBIs, very much in line with his career numbers. In fact, consistency has been one of the main features of his career, even if he has always been a below-average hitter, compensating to some extent with outstanding defensive play at a premium position. 2019 saw him hit .231 with 11 homers and 40 homers in 114 games, and in 2021 he was at .247 with 7 homers and 48 RBIs in 116 games. The numbers looked different in 2020, but that was largely because the season was reduced to 60 games by the Coronavirus pandemic; he played in 38 of these, and batted .204 with 5 homers and 13 RBIs in a year in which offensive numbers were down across the board (as a comparison, his OPS+ was 75, exactly the same as the following season). He won his second Gold Glove that season, and was able to appear in the postseason for the first time when the Reds took advantage of the expanded postseason format to play in the Wild Card Series, where they faced the Atlanta Braves. The Reds struggled at the plate collectively in that brief series, failing to score a single run in the two games, and Tucker went 0 for 5 with 3 strikeouts.

He was the first major league player to be traded following the 2021 season, when on November 3rd, the day after the end of the World Series, he was sent to the Detroit Tigers in return for minor leaguer Nick Quintana. The Tigers were looking for an experienced catcher with strong defensive numbers, while the Reds wanted to turn the position over to top prospect Tyler Stephenson.

In addition to Drew Storen, Barnhart is a childhood friend of NBA All-Star and Butler Bulldogs legend Gordon Hayward.