Note: This page is for Tommy Brown, major league player in 1944-1953. For others with similar names, click here. 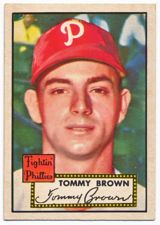 "We were in New Orleans for a three-game series. I went 4-for-4, 3-for-3, 3-for-3 and in between, I had six walks. That’s 16 straight times to reach base. Then we came to Nashville and they walked me the first four times. That made it 20 in a row and a Southern Association record. A groundout ended the on-base streak..." - Tommy Brown, remembering how he set the Southern Association record of reaching base 20 times in a row

"Brown once fielded a ground ball and threw it past Howie Schultz into the upper deck. One time somebody hit a ground ball to Brown, and the ball went through his legs, but Brown continued the motions as though he had fielded it, and he made a phantom throw to first, and Howie Schultz stretched as though he was going to catch it, and Augie Galan, who was in left field, was fooled watching the play, and when the ball rolled by him, Brown was charged with a four-base error. Galan said 'I kinda thought it might have gone through him, but when Schultz stretched and Brown followed through, I figured he had thrown the ball.'" - Larry King, to Peter Golenbock, Bums: An Oral History of the Brooklyn Dodgers

Tommy Brown, sometimes called "Buckshot", broke into the major leagues at the age of 16 and had a nine-year major league career. Leo Durocher gave him the nickname, because his strong arm had a tendency to spray the balls everywhere.

Brown, born in Brooklyn, quit school at age 12 and began working on the docks with his uncle. He played on neighborhood teams and, one day, the first baseman on the team suggested they go to a Brooklyn Dodgers tryout together. He was only 15 at the time, and was signed by the Dodgers at 16 in 1944. At first, he was sent to Bear Mountain, NY, and then to the Newport News Dodgers in the Piedmont League. He was leading that league with 11 triples in late July when he was called up to the majors. Overall, he batted .297/~.341/.462. He did not want to go, feeling that he was learning a lot where he was, but he was not given a choice. When he got off the all-night train, Durocher put him in a doubleheader. 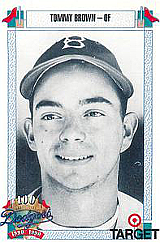 Tommy debuted August 3, 1944, for the Dodgers. He played 46 games, recording 146 at-bats, and hit only .164/.208/.192 while making 16 errors. He was not, however, the youngest player in the league. Those honors went to Joe Nuxhall, who was 15. Brown was to be one of the ten youngest players in the league all the way through 1949, his fifth season. The Dodgers' regular shortstop before World War II was Pee Wee Reese and, in 1944, the Dodgers had been using Bobby Bragan at shortstop. The next year, 1945, Brown improved to .245 at the age of 17 and became the youngest player to hit a home run in the majors. He also mashed 4 triples in 57 games. After one of those triples, he stole home against pitcher Rene Monteagudo, becoming the youngest player to steal home. He spent most of the year with the St. Paul Saints, batting .286 with 10 homers. Although he was a shortstop in 1944 and 1945, after that, in the majors, Brown played mostly other positions - third base, outfield, second base, and first base - until he went back to short late in his career with the Chicago Cubs.

Brown missed the 1946 season due to military service. Ironically, he had been playing primarily due to player absences due to World War II, but when war ended and they came back, he was old enough to serve his tour of duty. The Dodgers won the pennant in 1947, but Brown appeared in only 15 games and did not play in the 1947 World Series. He later said that some of the Dodgers during spring training signed a petition against playing with Jackie Robinson, but Brown refused to sign. In 1948, he hit .241 with only six extra-base hits in 54 games. 1949 was a step forward for Brown, his fifth season. He was 21 and hit .303/.347/.427 in 41 games. It was higher than star shortstop Pee Wee Reese slugged. He appeared in two World Series games. Although in his fifth major league season, he was still younger than Duke Snider (22), Gil Hodges (25), and rookie Don Newcombe (23). He was no longer the youngest player on the squad at least, as third-year man Erv Palica was a few months younger. 1950 was even better, as he hit .291 with a .378 OBP and slugged .616 in 48 games at the age of 22. He hit 3 consecutive home runs in a game in September. The Dodgers were to continue to play well in the 1950s, but they traded Tommy, still only 23, in June 1951.

Brown finally got a chance to play a lot after a trade to the Philadelphia Phillies. In the second half of the 1951 season with his new team, Brown logged 196 at-bats, hitting 10 home runs but batting only .219. Although still a youngster, he was a savvy veteran who was playing third base on September 3rd when rookie Willie Mays hit what appeared to be an inside-the-park home run. Brown claimed Mays had failed to touch third base, and Mays was called out and awarded a double.

The Phillies, though, were unwilling to give Brown more of a chance and traded him to the Chicago Cubs in June 1952, where he played under manager Phil Cavarretta. He hit well with the Cubs during the rest of the season, hitting .320/.358/.420 with 11 doubles in 61 games. The Cubs put him primarily at shortstop, a position he had not played in the major leagues since 1947, and he made 14 errors in 39 games at that position. The Cubs in 1952 and 1953 were going with Roy Smalley and Eddie Miksis as the double-play combination, and were not very happy with it. They had signed a couple of promising black players, Ernie Banks and Gene Baker, but they were not in the majors yet. Smalley and Miksis and Brown all played some shortstop in 1953, with Brown hitting .196/.279/.304 in 138 at-bats. The next year, Banks and Baker took over at shortstop and second base, both hitting .275 with some power.

After his baseball days, he stayed in Nashville, married a Nashville woman and worked in the Ford glass plant for 35 years. An article titled Looking Back: Tommy Brown - Local Record-Breaking Player apparently appeared in a Nashville paper in 2005. It includes an interview with Tommy about his career. While it is no longer exactly on the web, it is cached here: Looking Back: Tommy Brown - Local Record-Breaking Player

"Being 12 years old, working on the docks and playing street ball, I didn't have much time. That's the only thing I missed was being a kid." - Tommy Brown