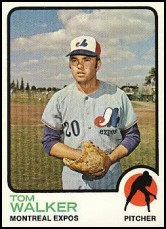 Tom Walker was a first-round pick of the Baltimore Orioles in the January 1968 amateur draft, He pitched six seasons in the bigs and had a 3.87 ERA in 191 games.

Tom, who was born in Florida, started in the minors at Miami in 1968 and 1969. During his first four years in the minors, from 1968 to 1971, his ERA was never higher than 2.82. On August 4, 1971, he pitched one of the finest games in the history of the minor leagues, pitching a no-hitter for 15 innings for the Dallas-Fort Worth Spurs against the Albuquerque Dodgers in the Texas League. His manager was Cal Ripken, Sr. who left him in the game until he finally picked up the 1-0 win, after Enos Cabell doubled in Mike Reinbach in the top of the 15th. Walker struck out 11 and walked 4 that day and made 176 pitches on the night, retiring Lee Lacy for the last out. Only Fred Toney, who pitched 17 no-hit innings in the Blue Grass League in 1909, has pitched a longer no-hitter in the history of professional baseball. Walker went 13-9, 2.25 that year, catching the attention of other teams even though the Orioles, who featured four 20-game winners on their 1971 staff, had no place for him.

He came to the majors in April of 1972 after being selected by the Montreal Expos in the 1971 Rule V Draft and making the team's opening day roster. He had a 2.89 ERA in relief for the team, with a 2-2 record and 2 saves. After the season, he played with Roberto Clemente, along with Expos teammate Balor Moore, in the Puerto Rican League, where he became a friend of the Pittsburgh Pirates superstar and great humanitarian. He helped him load the relief plane that Clemente prepared in support of the victims of the Nicaraguan earthquake on New Year's Eve. He wanted to accompany Clemente on his mission, to assist with the unloading in Managua, but the veteran asked him to stay and enjoy the new year's celebrations instead. As it turned out, the plane crashed shortly after take-off from San Juan, Puerto Rico, killing Clemente and the three other occupants.

With the Expos in 1973, his ERA was 3.63, with a record of 7-5 and 4 saves. He was 10 years younger than teammate Ron Fairly. After two solid seasons with the Expos, he was seen as a potential replacement for closer Mike Marshall after his trade to the Los Angeles Dodgers following the 1973 season, but Walker had his poorest season to date, posting a 3.83 ERA in 1974, and he was passed by veteran Chuck Taylor and rookie Dale Murray on the depth chart. He was briefly sent down to the AAA Memphis Blues, where he made 5 starts and won them all with a 1.35 ERA and 2 shutouts, and by the end of the season, he was being used as a starter in Montreal, finishing the year at 4-5 with 2 saves. With the Expos having a number of right-handers but no reliable left-handers on their pitching staff, he was traded to the Detroit Tigers after the season, along with catcher Terry Humphrey in return for veteran lefty Woodie Fryman.

With the Tigers in 1975, he was used as a swingman, making 9 starts in 36 appearances with a record of 3-8, 4.45; he was the same age as teammate Ben Oglivie. The St. Louis Cardinals bought his contract prior to the 1976 season and he split the year between the Cardinals and the AAA Tulsa Oilers, where he went 9-5. The Expos brought him back in 1977, but he was placed on waivers in mid-July, ending up with the California Angels, for whom he pitched his last major league game on July 23, 1977. That year, he pitched for the Expos, the Angels and the farm clubs at Salt Lake City and Denver. He was 7-0 at Denver in 20 games as a reliever.

In 1978 he pitched at Columbus in the Pittsburgh Pirates organization. He retired after the end of the season and settled in Pittsburgh, PA.

He is the father of Neil Walker, the father-in-law of Don Kelly and the brother-in-law of Chip Lang, having maried Chip's sister, Carolyn. Neil was the couple's fourth child.