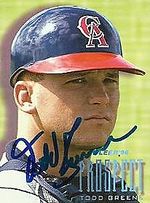 Todd Greene was a star outfielder in college at Georgia Southern University. He finished his college career third all-time in NCAA Division I with 88 home runs. He was still #3 as of 2009. He was named Player of the Year in the Southern Conference in 1993 and was a Southern Conference All-Star outfielder as well as a 3rd team College All-American OF. He played for Team USA when they got the Bronze in the 1991 Pan American Games.

Greene was drafted in the 12th round of the 1993 amateur draft by the California Angels. He was named the MVP of the Northwest League with the Boise Hawks that season, and was a Baseball America Short-Season A All-Star OF. In 1994, he was named MVP of the California League with the Lake Elsinore Storm and was the Angels' Minor League Player of the Year. In 1995 he hit 40 homers in the minors while with the Midland Angels (26) and Vancouver Canadians (14). He was the Texas League All-Star Catcher with Midland Angels and repeated as California Angels Minor League Player of the Year. Baseball America named him as DH on its AA All-Star team, and also as its 1st team Minor League All-Star catcher.

He made his major league debut with the Angels in mid-season in 1996 but hit only .190 in 29 games. back in the minors in 1997, he made the Pacific Coast League All-Star team at C with the Vancouver Canadians and Baseball America named him its AAA All-Star catcher. He hit .290 and slugged .556 in 34 games for the Angels that year and appeared poised to become a big league star, but it never happened. He was injured for part of 1998 and played only 29 games in the majors, none of them as a catcher. In 1999, he played a career-high 97 games for the Angels, but did not have a regular position. He had a bit of power, with a .243 average, 20 doubles and 14 homers, but his inability to draw a walk lowered his value significantly, as is attested by his OPS+ of only 79. He was already 28, and the Angels realized he would never be a superstar. He was released in spring training of 2000 and played for five different teams the remainder of his career, finding a role as a back-up catcher who could contribute with the bat.

Greene holds the all-time record for the most career home runs by a player with more home runs than walks (71 HR, 67 BB). The previous record-holder was Bill Schroeder (61/58).