Note: This page links to pitcher Smoky Joe Wood. For the former major league infielder who played in 1943, click here. For his son, who pitched in 1944, click here. 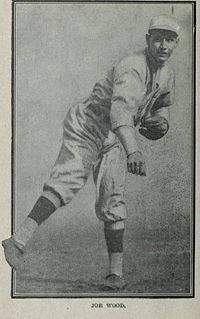 Smoky Joe Wood had two fantastic seasons as a pitcher for the Boston Red Sox and then, after an arm injury forced him off the mound, played a number of seasons as an outfielder. Although his best year in the majors was 1912, his name pops up in baseball history as late as 1981.

Wood was a teammate of Babe Ruth, Tris Speaker, and Harry Hooper during his Boston days as a pitcher; he won 34 games in 1912 against only 5 losses and also was the hero of that year's World Series, winning three games. In 1911, he had gone 23-17 with a sparkling 2.02 ERA. At his prime, he was reputed to have one of the best fastballs in baseball. In 1913, he suffered a thumb injury, tried to come back too quickly and hurt his arm badly. He was ineffective in 1913 and 1914, then came back in 1915 to post one more excellent record, 15-5, 1.49 in 25 games. He considered that he was fully healed, and as a result wanted a salary for 1916 reflecting his former status as the game's best pitcher; Sox owner Joe Lannin would have none of this, and as a result Wood sat out the entire season.

In 1917, new Red Sox owner Harry Frazee told Wood to work out a deal with another team if he could, and as a result he sought out the Cleveland Indians, on which his former room-mate Speaker was the big star. He worked out a deal, then, after protracted negotiations, the Indians agreed to pay Boston $ 15,000 for Wood's contract. The Indians thought they had landed a great pitcher, but he only pitched 15 innings in 1917. He apparently hurt his arm again in a 4-3 loss to the New York Yankees on May 26 - his only start and decision of the year - and he sat out the rest of the season hoping to heal.

Joe Wood was unable to pitch effectively in spring training of 1918 but caught a break anyway: the Indians were short of players because of World War I and injuries, and Wood earned a spot as a utility player. On May 24, he had the greatest game of his career, hitting two home runs - still a rare feat in those days - including the game-winner in the 19th inning for a 3-2 win against the Yankees at the Polo Grounds in New York. For good measure, he also robbed Elmer Miller of an extra-base hit against the left-field fence in the bottom of the 9th to send the game into extra innings. That game heralded his conversion to a full time outfielder, and in 119 games, he hit a solid .296 (good for 7th in the league) with 66 RBI (which placed him 5th). In spite of his great performance, his playing time went down over the following years as the Indians had a glut of outfielders, including Speaker, and left-handers Jack Graney and Elmer Smith. Wood was relegated to a platoon role, hitting .255 in 72 games in 1919 and .270 in 61 games in 1920. That year, the Indians won the pennant under manager Speaker, after finishing second the previous two season. Wood played in the 1920 World Series, where he started several games and batted sixth in the order. In 1921, still caught in a numbers' shuffle, he hit .366 in 66 games. He finally got another chance to play regularly in 1922 and hit .297 in 142 games, with 8 home runs and 92 RBI. However he announced his retirement as a player after the season, for reasons that have not been made entirely clear.

Wood was baseball coach at Yale University from 1924 to 1942. He also coached his son, Joe Wood, who would play briefly in the majors.

In 1948 Babe Ruth, shortly before his death, visited his old friend and teammate Joe Wood, who had been the coach of the Yale University baseball team. Ruth had his picture taken with Wood and the captain of the baseball team, a good-field, no-hit first baseman named George Bush, who would later become president of the United States in 1989.

"When I wasn't lying awake thinking and planning and fighting over that furious pennant race, I was dreaming restless dreams about it." - Smoky Joe Wood in 1920

Last survivor from the first decade of the twentieth century