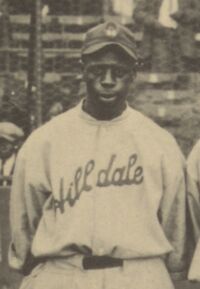 Script Lee pitched and umpired in the Negro Leagues.

Lee was a schoolmate of Duke Ellington, who went on to be one of the most famous Jazz musicians of the 20th Century. Script played football and baseball as a youth. In 1916, he joined the National Guard and served on the Mexican border during the Pancho Villa uprising. During World War I, Lee served in the 372nd Infantry in France, earning a Purple Heart. He was discharged from the military in 1919.

Nip Winters advised Lee to try out for a team run by Chappie Johnson and the right-hander got a contract worth $175 per month for Johnson's Norfolk Stars. In 1922, Lee moved up to the Baltimore Black Sox. He switched to the Hilldale Club in 1923 and went 6-5. Lee was 2-4 with a 3.72 ERA in 1924 and hit .353/~.421/.353 as a 1B/OF. The submarine hurler pitched over 10 relief innings in game 3 of the 1924 Negro World Series. In game six, lost a 6-5 decision in relief to the Kansas City Monarchs. Lee got the call to start game 10, the finale. He tossed 7 shutout innings but so did Jose Mendez. Lee then inexplicably switched to an overhand delivery and quickly surrendered five runs in a loss.

Lee went 7-3 for Hilldale in 1925. In the 1925 Negro World Series, Lee held Kansas City to one run through 8. Hilldale rallied to win the game after Lee left. The Washington native went 8-5 in 1926. In an exhibition that fall, he held a team of white major leaguers to one run on 7 hits; the white club included Heinie Manush, George Burns, Wally Schang, Bing Miller, Cy Perkins, Jimmie Dykes and Don Padgett.

After baseball, Lee was a taxi driver in Washington, then spent 31 years working for the Veterans Administration.