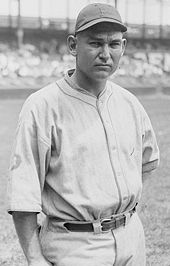 Left-handed pitcher Reb Russell had a tremendous rookie season for the Chicago White Sox in 1913, then after a few more successful years on the mound, blew out his arm but came back as a good-hitting outfielder in the early 1920s.

Russell was born in Mississippi but grew up on a ranch near Bonham, TX. He left home at 15 to work on the railroad - Bonham was a major stop on the Texas and Pacific Railroad - but his real love was baseball. He first played forn Bonham in the Texas-Oklahoma League in 1912, then was quickly purchased by the Fort Worth Panthers of the Texas League. This is where he was spotted late in the season by former major league pitcher Harry Howell, who recommended him to White Sox owner Charles Comiskey.

He attended the White Sox training camp in 1913, and surprised most observers by making the team. He was a favorite of coach Kid Gleason, who liked his excellent fastball and great control, which compensated for his lack of professional experience. His first major league appearance was in relief on April 18 against the Cleveland Naps, when he retired 9 of the 10 batters he faced, 5 of them by strikeout. This would not be a typical approach for Russell, who tended more to pitch to contact, and especially to use his rising fastball to induce pop-ups. He moved to the starting rotation shortly thereafter, and ended up leading the American League by pitching in 52 games. He notched 22 wins, 8 of them shutouts (and five of these by the score of 1-0 - this was the height of the Deadball Era) and pitched 316 ⅔ innings. Ater the season, he married a relative of teammate Joe Benz and moved to his wife's hometown of Indianapolis, IN, where he would reside for the rest of his life.

Reb Russell was doing well early in the 1914 season, when he was involved in a collision at first base with the New York Yankees' Les Nunamaker on May 26. He injured his left ankle and hip, and was no longer effective when he came back, while also putting on weight. He arrived in training camp in 1915 badly overweight, and manager Pants Rowland threatened to cut him on the spot. He followed a strict diet and exercise regime for a few weeks and managed to shed 40 pounds. He returned to form and won 11 games that year, including three shutouts. He was the team's opening day starter in 1916, but was shelled by the Detroit Tigers and sent to the bullpen. He came back to lead the team with 264 ⅓ innings pitched and 18 wins with a 2.42 ERA.

In 1917, Russell was slowed down by elbow problems in spring training. He was a used as swingman that year, while Red Faber and Eddie Cicotte anchored a pitching rotation that brought Chicago its first pennant since 1906. Still, he went 15-5, 1.95 and pitched well down the stretch, earning him the honor of starting Game 5 of the 1917 World Series against the New York Giants on October 13. That start did not go well at all, as he was pulled in favor of Cicotte without having retired a single batter and having placed the Sox in an early 2-0 hole (they would go on to win the game, with Faber getting credit for the victory in relief). He held out at the beginning of the 1918 season and was used sparingly, putting up a 7-5 record with a 2.60 ERA and displaying poor control. He was released after failing to retire a batter in his only appearance of 1919. His arm was gone, and while he played the rest of the season for the American Association's Minneapolis Millers, it was as a centerfielder, displaying good power.

After resting his arm all winter, he tried to return to the White Sox as a pitcher in spring training of 1920, but failed to make the team and went back home to Indianapolis to work in a garage. When the Minneapolis Millers came to town and were looking for an emergency outfielder, he agreed to play a game for his old team, and impressed enough to earn a contract for the rest of the season. He hit .339 with 6 home runs and 41 RBI in 85 games, then batted .368 in 1921, with 33 home runs and 132 RBI as the live ball was reaching the high minors in the wake of the batting success of Babe Ruth, a fellow left-handed pitcher turned outfielder. He hit 17 homers in the first 77 games of 1922 for the Millers and was signed by the Pittsburgh Pirates for the rest of the 1922 season. He platooned with Clyde Barnhart in right field, hitting a sparkling .368 with 12 home runs and 75 RBI in 60 games. However, he could not keep up this level of production, and in 1923, fell back to .289 with 9 home runs and 58 RBI in 94 games. Given his sub-standard defense in the outfield, he soon lost his job as a starter, riding the pines for most of the season's last two months.

After being released by the Pirates, Russell returned to the American Association where he was a hitting star for the Columbus Senators in 1924 and 1925. He played for his hometown Indianapolis Indians from 1926 to 1929 and won the batting title in 1927, hitting .385. He finished his career with a few more years in the lower minors. He then worked as a security guard at a meat packing plant.