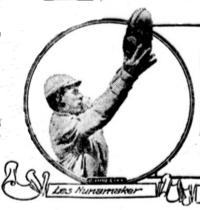 Les Nunamaker played 12 seasons in the major leagues. He was with catcher Pinch Thomas on both the Boston Red Sox in the early part of his career and on the Cleveland Indians in the later part of his career. He appeared in 35 games for the 1912 Boston Red Sox, who won the 1912 World Series, but Nunamaker did not appear in the series. Later, he did appear in the 1920 World Series along with Thomas, Smokey Joe Wood and Tris Speaker, who had been his 1912 teammates.

On August 3, 1914, as a member of the New York Yankees, Nunamaker threw out three Detroit Tigers stealing second base in the same inning. He is the only catcher since the turn of the 20th century to accomplish the feat.