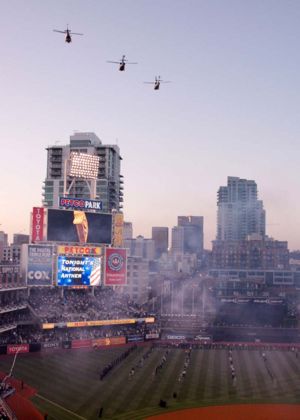 Petco Park, in San Diego, CA has been the home of the San Diego Padres since the start of the 2004 season.

Petco Park is located in downtown San Diego, CA at the intersection of Tony Gwynn Drive and Trevor Hoffman Way, both streets named after former Padres greats. The view beyond the outfield fence encompasses the downtown skyline, while there are various ocean views to be had from the seats. A berm bin the outfield serves as a public park when there are no games, while a historic building in the city, the warehouse of the Western Metal Supply Company, has been integrated into the park's architecture and holds luxury boxes. The design is modern, steering away from the "retro" look that was popular in most of the ballparks built around the same period.

Petco played as an extreme pitcher's park for a number of years after it opened, with a particularly strong effect of suppressing home runs, although around 2015, it became friendlier to hitters. This was due to modifications to the design of the fences, as well as construction outside the park which affected wind patterns.

In addition to hosting baseball games for the Padres and San Diego State University, Petco Park was the site of a Davis Cup tennis match between the USA and the United Kingdom on January 31-February 2, 2014. A clay tennis court was laid out in the outfield grass for the three-day event. 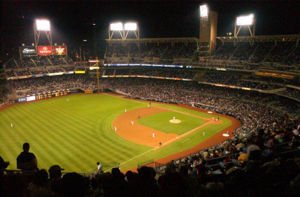 This page is in need of some additional content. Please help the Bullpen by expanding it, or learn how to contribute.
Retrieved from "https://www.baseball-reference.com/bpv/index.php?title=Petco_Park&oldid=1157140"
Categories: