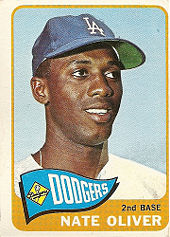 Nate Oliver had a seven-year major league career in the 1960s, mostly with the Los Angeles Dodgers.

Nate was the son of Jim Oliver Sr., who had played in the Negro Leagues. James Oliver Field in St. Petersburg, FL, named after Nate's father, was the first field to be refurbished under the Tampa Bay Devil Rays Field Renovation Program. Nate's brother Jim also played professional ball.

In the off-season before 1969, he was traded to the New York Yankees, and played one game with them before they traded him to the Chicago Cubs, where he finished out his career in 44 games hitting .159. It was the Cubs team that everyone expected to win the division, but finished second instead. Glenn Beckert was the regular second baseman, and the other infielders were Ernie Banks, Ron Santo, and Don Kessinger.

In 1989, Oliver managed the AZL Angels, and in 1990 and 1991 he was at the helm of the Palm Springs Angels. Oliver was coach of the Midland Angels in 1992-1993, and Albuquerque Dukes in 1994. In 1998, Oliver managed the AZL Cubs and in 1999 he managed the Daytona Cubs. In 2000, he was a roving infield instructor in the Cubs organization. In 2003, he took over the managerial reins of the Saskatoon Legends of the Canadian Baseball League in mid-season from Ron LeFlore.

In 2006, Nate was the bunting instructor for the Chicago White Sox organization.

The most similar player to Oliver, based on the similarity scores method, is Brad Wellman, a player from the 1980s.